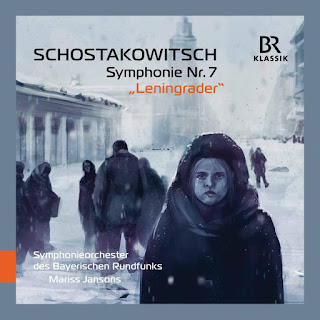 In so far as "War Symphonies" go, Prokofiev's Fifth and Shostakovich's Symphony No. 7 (BR Klassik 900184) are my very favorites, and likely the very best, especially in the Modern zone. And, face it "Wellington's Victory" or the "1812 Overture" are not quite symphonies and not meant to be masterpieces. Britten's "War Requiem" is great in its own way but it is not a symphony either, not exactly.

There is a magic to Shostakovich's 7th, a noble emotional strength and emotive reaching out that is hard for me not to appreciate. Why not anyway? So there is a new recording out by the Symphonieorchester Rundfunks under Mariss Jansons and I have been listening.

The long opening allegro movement to my mind is one of the most remarkable things that Shostakovitch wrote. It depicts the Nazi invasion-march into Russia as a gradually building, almost Revel-Bolero-like relentless crescendo that is ravishing, extraordinary, highly singular.

I am used to hearing Leonard Bernstein's New York Philharmonic recording (I had it on vinyl) and that version stays in my mind as a benchmark. The BR version here is a little bit light on the acoustics/miking of the opening snare drum (sounds a little more like a typewriter in the next room than a snare) and the pizzicato strings (perhaps not very woody or prominent enough) compared with that version and I must give that earlier recording the edge still, at least for the first movement. But this version is no sluggard, surely. Far from it.

It is recorded live, which helps explain certain things like ultimately the balance of the first movement. By the time it is building up a bit everything seems at proper levels. The arco strings sound especially majestic throughout the entirety of the recording.

And on the whole this version is rousing and very movingly done. For the March in the end the Bernstein is hard to beat. This version does a bang-up job nonetheless. The final movement performance here is something of a revelation to me, with a lot of panache.

I am very glad to have it, and to hear it in detail. You should have this symphony if you are serious about last century and etc. This goes in my head with Shostakovitch's Quartets as some of his very finest music. The BR version has its strengths and I am glad to have it as a supplement and another view of it all. Bravo!

Posted by Grego Applegate Edwards at 4:34 AM