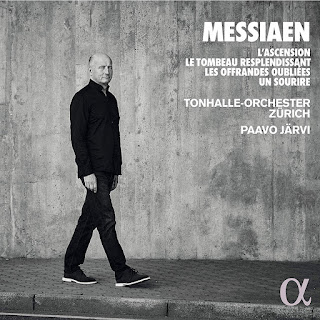 On today's CD (Alpha 548) we have three orchestral works by Olivier Messiaen (1908-1992) from the 1930s and one from the 1980s. Paavo Jarvi most ably and dynamically directs the Tonhalle-Orchester Zurich for the duration of the program.

Early Messiaen is a world apart from anything that preceded him, even at times that which followed, namely his later works. I was happily introduced to his music years ago by way of a recording of his "Turangalila-Symphonie" of 1948, a remarkable work in so many aspects but also in part very much a model recapping of his first period (that aside from his fascinating incorporation of "popular" melodics that almost sound like music hall pieces from another planet!) .

Much of the charm and original daring of that work is contained in microcosm in the three early works we hear on this program, "Le Tombeau Resplendissant"  (1931) for a rhythmic-melodic asymmetry and vibrancy, "Les Offrandes Oubliees"  (1930) for its supernatural, otherworldly chorale sort of sound with a remarkable Modern harmonic movement that was all his own.  Interestingly that motion is echoed in the 1989 "Un Sourire" (spelled by a well-developed, contrasting birdcall-like set of interjections).

Finally "L'Ascension" (1932-33) begins with another such chorale, beautifully orchestrated for brass and other instruments in a block of pristine sound initially unprecedented in modernity outside of Messiaen himself. This the first of four movements sets us up for what follows. Restlessly then sublimely unfolding whole-tone melodic chains of linking sound follow and we proceed happily further from there for surely one of his greatest early endeavors.

The appearance of tonal light so pronounced in Debussy and Ravel takes on further luminosity in "L'Ascension." Messiaen matched himself for the refracted light sound he was so endowed to produce but in my opinion never quite surpassed himself either. It is a true revelation to hear this early masterwork in the hands of Paavo Jarvi and the Tonhalle-Orchester Zurich. And so I unhesitatingly call this one to your attention.

Jarvi and the Zurich orchestra give us carefully executed and often rousing renditions of the works, which afford us a catbird's seat view of the early (and later) brilliance of this supreme master of Modern music.The volume is a great place for the Messiaen acolyte to start and a worthy addition to the Messiaen lover's collection. Essential.