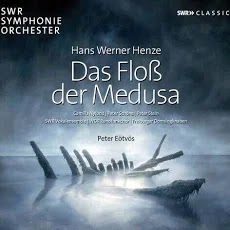 This newly released  recording of Hanz Werner Henze's oratorio Das Floss der Medusa (SWR Classic 19082CD) is only the second to become available as I understand it, the first being of a rehearsal. This one is a live concert performance. It features the SWR Symphonyorchester and SWR Vokalensemble, the SWR Rundfunkchor, the Freiburger Dominsingknaben along with soloists Camilla Nylund, Peter Schone and narration by Peter Stein. Peter Eotvos directs and conducts. The results are excellent.

And in listening I could not help but draw comparisons with Berg's Wozzeck--in the sense that the work feels like a kind of descendant in mode, sound and mood of pathos, a familiar in its own right, with likenesses and differences that perhaps a grandson might exhibit.

It is the choral-soloist-orchestral opus that Henze did so well. If you do not understand German the somewhat lengthy parts narrated/recited in that language may be less interesting than more, but then there is a great deal of wonderful moments in the music, ultra-High Modern in ways unique to Henze, a titan in the world he walked tall within. We hear why in this recording.

There are other works something like this to audition but I must say I am quite happy with the performance/work at hand as a whole after listening heavily to it. Anyone who wants to know Henze or know him better would be well-served and enlivened by this one. And it would be a valuable addition to the confirmed Henze fan's library. Recommended.


Posted by Grego Applegate Edwards at 3:56 AM