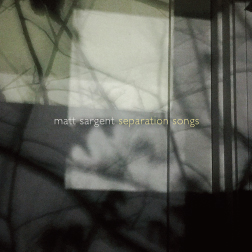 You may think you've heard everything there is to hear but there cannot be an end truly. For in real time there are of course uncounted hours of what you have not caught up with via pre-recorded things, and then there is live music on top of that. Well, if that isn't humbling what is? Add to that what music you yourself may make and indeed, what you might hum or whistle while out for a walk and, well there you go with a good deal of things, don't you?

Luckily out of the absolute everything of possibility there are good things still to be heard, very good things. Such a good thing is Matt Sargent's 70-minute chamber opus Separation Songs (Cold Blue Music CB0055) as played with proper and considerable spirit by the Eclipse Quartet. It is scored for two string quartets and consists of 54 variations on four hymns (1770) by William Billings. There is "separation" in the way tones from one hymn migrate into another one at every turn in the cycle.

Given the Cold Blue label designation you'd be right in assuming a Radical Tonality category for it. It belongs there...yet one notes also that it evokes in fact what it is -- on one level a string arrangement of old satb hymns such as (in more conventional form) might have been played on deck in the last hours of the Titanic's ill-fated voyage. The gradually timeless suspension the separations give rise to makes it as all in a dream, something ultimately without temporal provenance in the way it seems--and so it derives its radical quality in that way.

It is the oscillation of is and is not to the above that the music takes its power and charges it. It is the secret push to it all. Secret before it hits you that is. Then it is the IS that gets you in repeated hearings, how the music is radicalized in its sequencing as in some dreamtime realm we only know when we recognize its kithing kin-twin-ness so to say. It is as like-with-like without patently perceived repetition so much as continuity that this music derives its pull and charm from.

It grows on you after a matter-of-fact first hearing, like someone's words that seem simple but then in recall they take on deeper impact, so also this music in second, third, and etc., hearings.

That is the crux of this one. Hear it, contemplate it, then get it into your ear zone for good? Do. Process is product, and a very good thing it is!