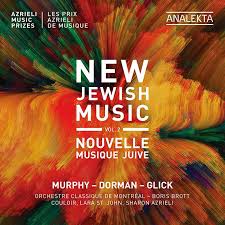 Having listened a goodly number of times to the Volume 2 of New Jewish Music (Analeka 2 9262) I can say that the works are generally most stimulating and even exciting. The title is self-explanatory; it is a set of compositions that illustrate in rewarding ways what a "New Jewish Music" in the New Music realm can sound like these days.

We hear Kelly-Marie Murphy's "En ei escuro es todouno (In the Darkness All is One)" for solo harp, solo violin and orchestra, Avner Dorman's "Nigunim (Violin Concerto No. 2)" and Saul Irving Glick's "Seven Tableaux from the Song of Songs" (arr. for soprano, piano and string orchestra by Francois Vallieres).

The first two works have a strongly rhythmic-melodic-harmonic traditional Jewish element intertwined into a Tonal-Modern orchestral texture and fiber. The Solomon work relies on Jewish Solomonic text to establish a Jewishness and is ever so slightly less specifically-musically "Eastern or Diasporan" in orientation. No matter in any case because the music convinces and even beguiles as you become familiar with it all, perhaps as is often the case some parts more than others but all giving you pause.

The performances are uniformly good with the excellent presence of the Orchestre Classique de Montreal, Colour (harp and cello), Lara St. John on violin and soprano Sharon Azrieli.

Those who find a New Music Jewish countenance in a tonal realm of definite interest should not be the least disappointed in this one. It is a fine program and I am glad to have it. Recommended.