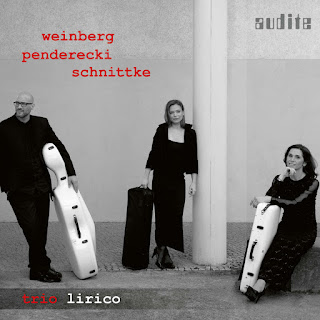 The String Trio occupies a special niche in world chamber music, whether Modern or Classical-Romantic. It is a challenge to write a great one, given the violin-viola-cello nexus of course, and a mind expanding experience to hear one such. Three by noted Eastern European Moderns are a revelation, especially as played by the formidable Trio Lirico on a recent offering (Audite 97.753).

It is no small matter of representative works, one a-piece by Polish-Russian Mieczyslaw Weinberg (1919-1996), the Polish Krzysztof Penderecki (b. 1933) and Russian Alfred Schnittke (1934-1998). They are played with care and zeal by Trio Lirico. Each work is a gem. They are from the nest of the Abstract Modern chamber string forays we have come to anticipate from the Eastern European zone since the marvelous quartets of Bartok and Shostakovich.

The liners note that all three lived behind the "Iron Curtain" until its fall in 1989. That may in fact explain some of the moods we encounter, as too a sort of temperament that does not shy away from deep pathos, angst and honest chagrin. True, there were distinct antipathies to new music in certain zones of the Soviet Block in certain periods but I am not going to be the one to explain it ALL away thus.

So too I do not feel it necessary to comment further since Eastern European Moderns are not primarily of the cheerful and happy bunch and it distinguishes them most certainly. There the waters run deep and not necessarily without opaque moments. And if cultural life forced composers to endure pressure at times to conform (i.e., to Social Realism dictates), we in the end profit from the depth of chagrin that might have gone into some of this music, or at least influenced the overall arc of it all. Still we must appreciate the real sacrifice such non-conforming involved at the time. For let us face it, this is music that could be seen by pedants as "formalist." It took courage to write such music.

Posted by Grego Applegate Edwards at 4:03 AM