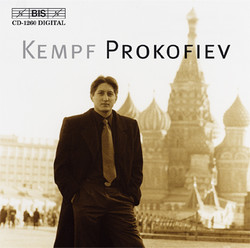 I've been living with the Piano Sonatas of Sergei Prokofiev since around 1972 when I got the more-or-less complete Prokofiev piano music on the two Vox Boxes (Gyorgy Sandor) that were quite respectable and inexpensive--and that filled me in nicely on what all there was to appreciate. I've been an acolyte ever since. And a fan, certainly.

Freddie Kempf is in the midst of a new Prokofiev Sonata cycle, coming out now with the Piano Sonatas 3 / 8 / 9 (BIS 2390 SACD) which sound quite well acoustically and give us a considered fire, careful yet with a modern tempered passion appropriate to the music.

The Third is less than 10 minutes long while the 8th and 9th run over 20 so there is a time element to consider--as Prokofiev clearly has more to say in the later sonatas.

Nonetheless all three sonatas are lucid, thematically tender-hard and bittersweet as the best Prokofiev can be. No. 3 dates from 1917 while 8 and 9 come from WWII (1944) and after (1947), respectively, the latter period in some ways hard times for composers enmeshed in the Stalin Social Realism orbit.  It took courage to do advanced music that could not be justified with some socially amenable scenario.

Happily Prokofiev did not reign in bu instead bursts forward with lyricism and a modern tempestuousness you find in dynamic ways. The tender-tough polarity is present in this music and in many ways it can relate to how "Modern Life" feels at times so that he speaks to me often as a listening being.

The integrates of melodic and harmonic spheres in the winding out of themes and overall developmental arcs are marvels in these sonatas to my mind. Listen closely and revel in it all if you can! I do.

Freddie Kempf understands that dichotomy and plays upon it with all the right nuances. Others may perform these works with a bit more frenzy but Kempf balances the two poles in near ideal ways to my mind, at least with these three sonatas.

I recommend this disk for all who love Prokofiev or want to know him better. These versions can stand alongside others in your collection nicely or they can be the sole occupants of this repertoire for you. Either way you should find it quite enlivening.
Posted by Grego Applegate Edwards at 4:45 AM