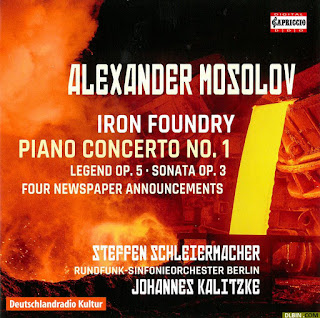 The story of Russian composer Alexander Mosolov (1900-1973) is inextricable from the story of "Socialist Realism" and its ultimately iron-fisted Stalinist single- mindedness. Mosolov was a very original voice in early post-Czarist Russia, but he ran afoul of repressive apparatchiks. Out-and-out modernism in art and music circles was at first encouraged in the Soviet Union. This was after all the future and so both Constructivist visual arts and unstintingly modern music were thought of by many as a necessary part of it all. Mosolov was an important voice on an international-local scene for a time, but then he found himself on the outs with the cultural taste-makers in the Soviet Union and so his music became anathema. And so both Russia and the modernist international world heard less and less of him.

"Iron Foundry," a short descriptive piece among the notable works he wrote in the important period between 1925 and 1929, ensured that he gained some renown over the world. But then there were other worthy pieces, too. The Rundfunk Sinfonieorchester Berlin under Johannes Kalitzke, with piano soloist Steffen Schleiermacher, has recorded a much-needed anthology of some key pieces, Iron Foundry, Piano Concerto No. 1, etc, (Capriccio 5241), and I have been happy to immerse myself in the recording for a week or so.

It expressively resurrects six Mosolov works from the critical period discussed, with "Iron Foundry" (1926-27) opening the program, followed by the "Piano Concerto" (1927), "Tractor's Arrival at the Kolkhoz," "Legend for cello and piano" (1924) the "Piano Sonata No. 1" (1924), and "Four Newspaper Announcements."

It shows us a vibrant modernist voice, not so much Russian nationalist as international. "Iron Foundry" still sounds as exciting as it must have when first performed; the "Piano Concerto" is a forgotten masterwork with great depth of field, and the remaining works help affirm Mosolov's place in the avant garde of the period.

Was he another Stravinsky? Prokofiev? Shostakovich? No, but mostly that is because he has his own voice. He may not have shown the lyrical melodic gifts of some of his compatriots, true. But he had a dynamic and sophisticated way all his own. It fits in with the new music scene of the time but it shows less influence than it does originality.

Aside from the controversies engendered in the various Nation-States about the futurist music that was blossoming in those days, Mosolov appears before us now as a composer fully deserving our consideration. The performances are quite good and the music transcends its era to speak to us today, as it simultaneously and necessarily embodies the era in which it was born.

Kudos to the artists for making this music breathe again in full force for us. It is a must-hear for all who seek to understand the musical world we now occupy, the roots of new music, the largely forgotten output of a genuinely talented composer. Bravo!