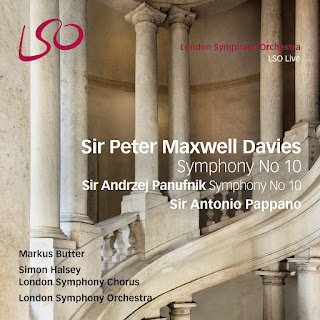 A welcome disk is on the docket today: The London Symphony Orchestra under Sir Antonio Pappano performs Peter Maxwell Davis' Symphony No. 10 and Andrzej Panufnik's Symphony No. 10 (LSO 0767).

Maxwell Davies' 10th, subtitled "Alla ricerca di Borromini," was written between 2013-2014 and enjoys its world premiere recording here. Panufnik's 10th lasts some 15 minutes and was written in 1988, just three years before he passed. Both are late mature works and they show the respective composers at their best.

The 10th by Maxwell Davies is a considerable, ambitious work that includes the London Symphony Chorus under Simon Halsey and baritone Markus Butter as soloist. It centers around architect Francesco Borromini (1599-1667) and his life and work. Davies was diagnosed with cancer early in 2013 and subsequently the themes of creativity and mortality that characterize the symphony took on doubly increased personal significance as he doggedly continued work on it with unrelenting determination.

The symphony is in four movements, some with chorus and soloists, some purely orchestral, all concerned with Borromini's projects and the flow of his life. The music has a deeply somber, melancholy cast, movingly dramatic in a widely expanded-tonal modern way. The work culminates in the final movement, where Borromini's last will and testament written just hours after a suicide attempt colors the music and serves as its principal text. It has a moving finality to it that leaves one with a feeling of completion but then of absence as well. This is Maxwell Davies contemplating the biggest issues of existence in ways completely personal yet thoroughly transcendent. The closing moments are haunting.

This is music of grand design, muted, reflective, ritually transformative in its singular expressivity. It requires your concentrated attention but rewards with outstanding Maxwell Davies sublimity.

The Panufnik 10th was commissioned for Sir George Solti and the Chicago Symphony Orchestra. It too has a somber way about it, a succinctly dramatic presence. The orchestration at times is considerably brighter that Maxwell Davies' 10th, with an opening for amassed brass that has a severe, bracing quality. The music continues with heightened dissonances and beautifully muted contrasts with an almost chorale continuity that gets punctuated by meaningful percussion tatoos, like a funeral march perhaps. It makes beautiful use of the full resources of the orchestra with exceptional blends and urgent outbursts. It concludes in a quiet hush that is near breathtaking. For all its brevity it is nonetheless stunning Panufnik, one of his triumphs.

The performances are first-rate, the music significant and masterful, the mood sometimes stoic, resigned, somber but in the end cathartic. Very recommended!