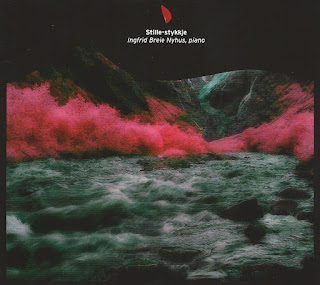 Ingfrid Breie Nyhus is a magically poetic pianist who specializes in repertoire that combines modern classical and folk idioms. Stille-stykkje (LabLabel 2015) is an offering of quiet piano works by two composers who have concerned themselves with Norwegian folk forms, transformed in different ways.

Olav Kielland (1901-1983) became enthralled with Norwegian folk music in the 1940s, especially the harding fiddle and vocal traditions. He moved his family to the west of Telemark, Norway to better immerse himself in the music. The sound of the natural world around him and the folk forms he so loved came together early on in his stay. When he heard his young daughter playing simple melodies on the piano it gave him the idea for the 20 quiet pieces, "Villarkorn," which exude a kind of naturalism and a sensitivity to the folk forms he heard around him. Ms. Nyhus performs the strikingly singular music with a sympathetic dedication that makes it all work.

Kielland felt strongly that folk-influenced music should not lose sight of the modality, grooves and polyphony of the originals. And so the 20 pieces come before us at times in utter simplicity, but perhaps deceptively so, since the irregularity of living folk tradition is somehow inherent in the pieces, as well as the special traits involving modal tonality, multi-part writing and an underlying freedom of expression. So it is not just simplicity that the music is about. And the music becomes more complex as the sequence of 20 pieces progresses. Ms. Nyhus internalizes the Kielland ethos and gives it back to us with beautifully evocative performances. If Satie was Norwegian and became enthralled with local forms, his music might have sounded something like this. That is a gross simplification, but it will give you some idea of the music's impact.

In contrast we have the music of Erik Daehlin (b. 1976), which Ingfrid presents to us in four interrelated segments. The music takes archival folk singing examples and excerpts melodic fragments, transforming them acoustically to varying degrees, then builds a solo piano part around them. His is a more disjunct modern approach but very fitting as a contrast to the "Villarkorn" pieces. The snippets of recorded vocalizations come at us in a quietly, ghostly sort of eerieness, as if the past were communicating to us from a distance, very much still alive.

And that in a way is what this album is about, the resurrection and transformation of a vivid body of folk forms, with contemporary music made out of the essence of its aural images to fashion a music anew.

It is thoroughly beautiful, still, quiet, yet with a movement through to the present, like water rippling forward inexorably but gently in a quiet rural stream.

This is a program of great beauty. Ms. Nyhus gives us ideal performances. Strongly recommended.