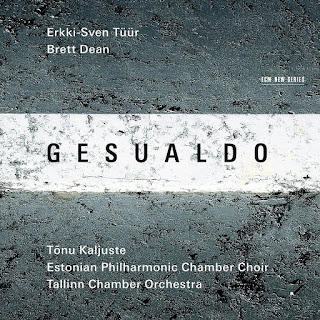 We are once again the the realm of early music-meets-modern-music with the album Gesualdo (ECM New Series 2452). Carlo Gesualdo da Venosa (1566-1613) was one of the most remarkable, expressive and harmonically advanced composers of his age. Stravinsky brought him to the limelight among contemporary music appreciators via an early 1960s album of his music and Stravinsky's own "Monumentum Pro Gesualdo," a substantial work honoring his importance. And now we have a fine current-day tribute on this new ECM release. It is a kind of celebration of Gesualdo's music and his era through several short Gesualdo works arranged for string orchestra and music inspired by Gesualdo from the Estonian composer Erkki-Sven Tuur and Australian composer Brett Dean. The Estonian Philharmonic Chamber Choir and the Tallinn Chamber Orchestra are the performers under conductor Tonu Kaljuste. They sound great.

Erkki-Sven Tuur weighs in with two compositions, "L'ombra della croce" (2014) and "Psalmody" (1993/2011), the latter making use of the choir, both scored quite nicely for the string orchestra in the former case, full orchestra in the latter. They have a post-modern meets early music way about them, with perhaps a bit of the neoclassical influence of Stravinsky. Towards the end of "Psalmody" there is a very nicely contrapuntal post-minimal jauntiness that provides a feeling of movement and energy, with the distinct hint of Reich and Riley influences transposed to a new plane.

They have a very ambient feel to them in the spacious sense, partially thanks to Manfred Eicher's lush sound staging, but they have a periodicity and continuity about them that point both backwards to Gesualdo and forwards to the present day.

The two short pieces-arrangements of Gesualdo help us contextualize it all and via the string orchestra allow us to hear Gesualdo in a kind of new light, as a figure who oftimes resonates with a near-modern sense of expressive dissonance, but also as an advanced master of the contrapuntal part writing in his time.

Brett Dean gives us a rather monumental "Carlo" (1997) for choir and string orchestra. It is an impression of the world of Gesualdo as he lived in it both musically and otherwise. The work moves from an arrangement, then excerpted bits of Gesualdo's madrigal "Moro Lasso" in a vocal-orchestral collage that traverses the ages to end up in our modern era and the sound of its new music, Dean style. It is quite impressive to hear, a remarkable work on many levels.

So there we have it. The album gives us much to savor and yet another take on how the past can energize and help rebuild and extend our present-day modern musical world. It is a joy to hear! Very recommended.