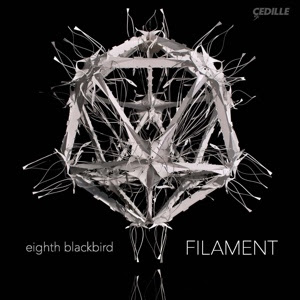 You know everyone and her grandmother has reviewed a record already if you search for the cover image and the results are huge. That just happened to me with Eighth Blackbird's striking new anthology Filament (Cedille 90000 157). It is not surprising. Eighth Blackbird is one of the premiere new music ensembles out there and the album is filled with some modern postmodern and/or minimalist gems.

There are four composers and a total of five works, all in the chamber and chamber orchestral idiom. Every one of them is executed with hairpin excellence. Perhaps the most vibrant and difficult is a Philip Glass classic that I have never heard. "Two Pages" is a unison line from 1968, to be played by any number of instruments, with the proviso that they play the rapid waterfall of notes in exact unison. Eighth Blackbird get just the proper torque on this jaw buster. The results are vintage Glass, mesmerizing and riveting, classic mind-bending music that typified his work and those of the other stalwarts at the time.

That is the centerpiece, if you like, for a series of compositions that take the classical minimalist ethos and permute, distill and rethink it. "Filament," as the liner notes explains, is a strong connecting element that unites composers and performers via a strong charge. The program has that sort of connectivity to my ears.

Son Lux's two short pieces makes that filament concrete with remixes of elements contained in the works on the album and adds a part for vocalist Shara Worden. It is virtuoso re-assemblage that evokes something beyond the given in nicely turned, fascinating ways.

Bruce Dessen's "Murder Ballades" takes its cue from the old story folksong tradition that recounts the taking of a life by another, either as a newsy report of a real incident or something mythically fictional. The seven-movement work has a folksy quality and contains yet underplays repetition for a more song-like linearity. It is the reworking of how such songs might be presented in ingenious fashion, as complex multi-part contrapuntalities, alternately bracingly stomp tempoed, jaunty, or slow and musing.

Nico Muhly 's "Doublespeak" was written in honor of Philip Glass's 75th birthday, reworking the classical minimalism of the '70s, a time when, as Muhly notes, "classical music perfected obsessive repetition." Fast and slow parts intermingle with the sort of classical minimilist joie de vivre that the '70s represented, but with a kind of collage-oriented overall conflation and event-specific sectionalism that marks it as very much of our times.

In the end the music is wonderfully played, highly significant and beautifully listenable. This is Eighth Blackbird at its best, surely. We get masterful music that all with an interest in the pomo modern scene need to hear. Very recommended.