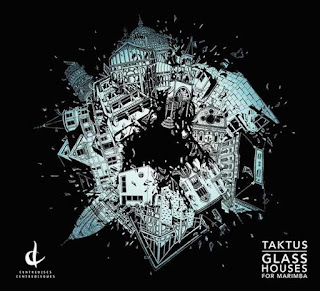 The beauty of the marimba for contemporary modern minimalism was established definitively by Riley and Reich. Its combination of clarity of percussiveness and of short duration resonance makes it an ideal instrument for tonal rhythmic repetition and variation.

The marimba duo Taktus, Greg Harrison and Jonny Smith, shows us how this can be the case for the music of the late minimalist Ann Southam, in their two marimba arrangements of six pieces from Glass Houses (Centrediscs 21415), originally intended for solo piano. Southam's music has been covered on these pages (type her name in the search box) including some of the original piano versions of "Glass Houses." The works are notable in many ways, but there is a characteristic independence of parts and rhythmic complexities between the left and right hand piano roles that make it necessary that the music be arranged to two marimbas instead of one. And that also makes for an excellent way to hear her highly developed part writing.

Smith and Harrison have done exactly that. The music moves forward singingly and brightly in their hands, giving us another way of hearing Southam's music that is both quite true to her objectives as well as an impressive tour de force for the two players.

Music hath charms. In this case it hath very many. The music has Southam's special way about it, which in this incarnation if you were to look for lineage forebears, comes somewhere in between Orff's Gassenhauer and Reich marimba music, the former for its refreshingly straightforward melodic element and the latter for the complex interlocking counterpoint. That would be a rough approximation only, since the music has its own way and the beauty of a marimba taking on the part of each piano line adds a great deal to the proceedings, especially as played with such vitality by Taktus.

The album is very much a delight to hear. Southam is complex and inventive enough that repeated hearing continues to unfold the music for you; it is tunefully affective enough that every time you hear it is pure pleasure. I can't think of any music better suited for two excellent marimba players! Get this one with no fear. It is exceptional--a tribute to the continuing relevance of Ann Southam and to the fine virtuosity of Taktus.