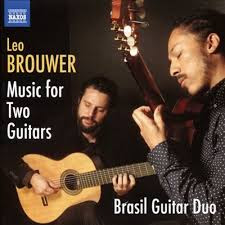 Cuban composer Leo Brouwer may be the greatest living exponent of classical music for guitar. I usually shy away from such superlatives, but throughout his long life he has crafted some gems that lay just right on the fingers, music that sounds like it is absolutely specific to the classical guitar tradition, but also exceptionally fine music in itself.

We get a sweet assortment of pieces of this kind on the Naxos Music for Two Guitars (Naxos 8.573336) played with true artistry by the Brasil Guitar Duo (Joao Luiz & Douglas Lora). There are five works in all, written between 1957 and 2009.

We can follow Brouwer's compositional development in many ways by listening chronologically to the works. The earliest ones, "Triptico" (1958) and "Micro piezas" (1957), have a contrapuntal regularity and a modern melodic-tonal approach delightful to hear. Then as we listen through to "Musica Incidental Campesina" (1978), "Per suonar a due" (1973), and the later "Sonata de Los Viajeros" (2009), we find increasing freedom of expression, a greater variety of sound colors, less rhythmic regularity at times and juxtapositions of tonal and advanced modern extra-tonal qualities according to the creative needs of the moment.

Either way this is exquisite music for guitars and the Brasil Guitar Duo have taken great care to realize the music in beautifully idiomatic performances.

Whether you are a Brouwer enthusiast or know little to nothing of him, the album at hand will give you a great deal of fine music to dwell within, time after time. It is golden. And for the Naxos price? Worth every penny, but also not that many pennies, either!