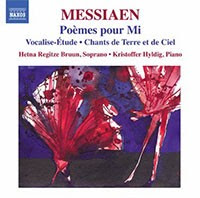 Olivier Messiaen (1908-1992) was one of the 20th century's brightest lights, needless to say. Like Picasso or Stravinsky or Coltrane his work can be grouped into several periods. There is the opening burgeoning of his originality, which is roughly from the '30s until the beginning of the '50s, then there is the songbird period that lasts through sometime in the '70s and finally the works of his late maturity that cover the final decades.

This is only a rough gauge, the primary dates of the songbird period may need slight adjustment since I am working from memory, but it serves to place the music at hand today. It is a gathering of vocal music from his first flowering, Poemes pour Mi (Naxos 8.573247) as performed by the Bruun Hyldig Duo (Hetna Regitze Bruun, soprano, and Kristoffer Hyldig, piano).

This is music that bears the highly original stamp of the melodic-harmonic ways of Messiaen in the first phase of his career. They are expressive but not romantic, modally and rhythmically alive, filled with lightness and air in a post-impressionist way, with text-setting and melismatic passages of a highly effective sort, and lushly carpeted piano complexities that all serve to make this music highly original, like no other.

"Poems pour Mi" is the most well known but the "Chant de Terre et de Ciel" occupies an important place also, forming the center of the three song cycles that helped define Messiaen in those days. "Harawi" from 1945 completes the cycle of cycles, and is not a part of this collection due to space considerations. The Duo have recorded it as a separate Naxos release, but I have not heard their version.

We get an abundance of exceptional music here nonetheless, some of Messiaen's most powerful early music in performances that ring true. If you do not have these works, here is a very good way to get them! Much recommended.