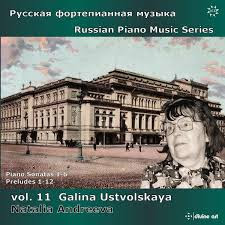 A modern Russian composer not familiar to me is happily spotlighted on the two-CD set Russian Piano Music Series, Volume 11, Galina Ustvolskaya (Divine Art 25130). Ms. Ustvolskaya (1919-2006) wrote a set of 12 Preludes (1953) and Six Piano Sonatas (1947-1988) over the course of her life. Pianist Natalia Andreeva gives us finely honed, expressively thoroughgoing renditions of these, which comprise Galina's complete output for solo piano.

The liner notes reflect on her life, calling her "one of the most mysterious figures in the post Prokofiev-Shostakovich era of Russian music." She is not well known even in Russia. She was a pupil of Shostakovich and spent her life in relative isolation in St. Petersburg. She visited Europe only in the 1990s where her music was performed in several music festivals. Her publisher catalogs some 25 works in all.

There have been some several CDs of her music in later years, two books and such. She believed in working deliberately and carefully over her music, which explains the somewhat modest complete catalog. Her music has no bar lines, is written in 1/8 or 1/4 time, favors clusters on occasion, puts great emphasis on accents and dynamics, which can range from fffff to ppppp, uses unconventional playing techniques at times, like playing with the knuckles, and has a starkly dark style that is not tonal in any simple way, and oftimes is thoroughly atonal. Her later sonatas have been performed with a ferocity that caused some to dub her the "lady with the hammer." Galina was not always happy with some of these performances. Natalia Andreeva consciously set about learning the piano works in great detail and with an emphasis on musicality per se. She conveys to us the picture of a composer of acute demeanor, a school of one if you like.

And so we get a progression from the preludes and through to the sonatas with Andreeva convincingly tempering the starkness and dramatic dynamic contrasts to a poetically musicianly pianism that tends less toward a savage, harsh sort of interpretation of the music to something highly evocative in all its stark despair.

The music as a result sings fully though characteristically brusque and arctic at times. No one can make of a two-part fugal counterpoint such an icy prospect as can Ustvolskaya. She is very much an expressionist I would say, with the kind of black and white primalness of a classic expressionist woodcut.

It is beautiful music, totally without concessions, extraordinarily original, turgid, high modern without respite. That means you must put yourself squarely into her world to appreciate her the more deeply. And if you do that repeatedly there is magic. Ustvolskaya, based on this recording, is a discovery of great magnitude. I salute Ms. Andreeva and those at Divine Art for making this music so vibrantly available to us.

It leads me to an urgent need to hear her orchestral music and/or everything else she wrote. That's how it affects me. If you like discoveries in the high modernist realm, Galina Ustvolskaya and this set of the piano music is a highly important one, something that will surely give you another way of hearing musical modernity.