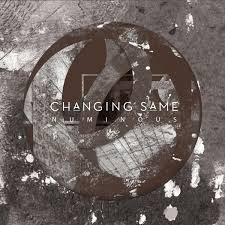 The grouping together of modern classical and rock elements today owes a great deal in terms of forefathership (or mothership) to Frank Zappa. He did it from the '60s onward and did it well. He set the tone and opened up the possibilities for the group of composer-artists who have followed. Joseph C. Phillips Jr. and the ensemble known as Numinous give us something well done in the conflationary zone on their recent six-work album Changing Same (New Amsterdam 068).

It is a 20-member chamber ensemble that includes winds, strings, guitars, electric bass, four vocalists (plus one guest in a solo role for one piece) and etc. The ensemble sometimes has a Reich-and-beyond sonic shimmer to it, though there is not always a primacy of repetitive elements in the short motif sense of typical minimalism, more like at times to the function of the riff in rock and jazz. Other times it enters into the music but seems secondary to the variations and linear melodic thrust of the work at hand. Phillips' handling of the motifs and their orchestration gives him a leg up to my ears.

The most compelling piece to me is the opening "19," which is the most overtly rock-classical in conflation. It is the most original and convincing of all the music here. But the other music shows us other and interesting sides of Joseph C. Phillips Jr. And all sides show something of a lyrical sort of pomo homespun quality.

There is a song or two and throughout a creative freshness that marks this music as occupying a world on its own, something like what the Bang-on-a-Can composers have done to bring out originality within a shared stylistic set of elements.

In the end Changing Same gives you a very worthwhile and pleasing program on tonal minimal/post-minimal pomo modernism with an infusion of rock electricity at points (especially via electric guitars) and a original contributory thrust that makes this something to open another similar-yet-different door onto the current territory.

I found it music to energize the flagging soul. It keeps your interest throughout by the inventiveness of the writing and zeal of execution. So for the pomo enthusiasts I recommend this highly. "19" gives us something different yet again. I hope he does more like that as well! Listen to this one.

Posted by Grego Applegate Edwards at 5:05 AM