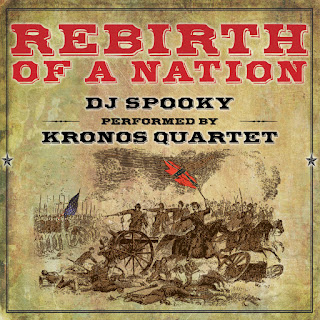 D. W. Griffith's "Birth of a Nation" is considered one of the masterpieces of early American cinema. Yet seen today it is to us repulsively racist and distorted in its depiction of the rise of the USA as a nation state. D J Spooky (aka Paul D. Miller) has composed a sort of anti-soundtrack and exorcising of the film in his long-form work Rebirth of a Nation (Cantaloupe 21110), featuring the Kronos Quartet.

This is pomo classical minimalist, prog rock, hippish hop, beats and sophistication modern music with Kronos in person, sampled, dubbed and added to a smorgasbord of sampled instruments, synths and sounds such as you might imagine might come from the extensively fertile creative mind of D J Spooky. There is a CD of the music as originally conceived, plus a DVD of Griffith's silent movie with Spooky's music edited and synched to fit the film.

There are rock-like repetitions of figures, minimalist trance repetitions along with that, and a thematic flow which has a sequential logic to it. It is music for classical listeners with something of a taste or hunger for prog with a seriously composed element, or on the other hand, classical music that prog listeners might find accessible and attractive. For those in the middle it is simply music that will seem at once familiar yet cohesively original.

I have not watched the movie synched with Spooky's music as yet, but I can well imagine it transforms the experience nicely.

Say what you will if you are a purist from the various possible camps, it is significant music, D J Spooky at his most ambitious, convincing in its flow and girth. For that it is a real contribution to the crossover hybrid sounds so much a part of the modern today. Listen!

Posted by Grego Applegate Edwards at 4:43 AM