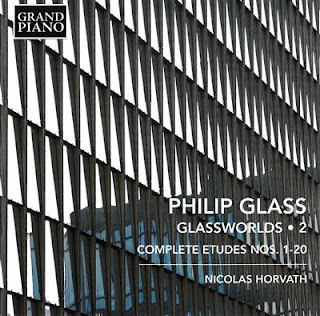 There is a point where performance can make or break a work. I've certainly come to that with many pieces, but for some of the minimalists it is especially true. Philip Glass, one of the doyens of minimalism (even though perhaps he does not like the term) has been quite prolific in later years. The solo piano works are very much a part of the output, and in the past I have found some of them disappointing.

I don't feel that way on the recent recording Glassworks 2, Complete Etudes Nos. 1-20 (Grand Piano 690). And as I listen I realize it has much to do with Nicolas Horvath as the pianist. This is his second collection of Glass pieces. I have not heard the first as yet, but this one gives me plenty to appreciate.

The works were composed in spurts from the nineties through to nearly today. They have a cyclical quality as one might expect from Glass. The brilliant Lisztian-Rachmaninovian virtuosity that Nicolas Horvath brings to the cycle generates a good deal of bravado and even excitement. It makes of the Etudes a series of grand flourishes, of tumultuous outbursts that become something more than a sort of rote attention to the motifs would give you.

Glass himself tends to look at these works as allowing a good deal of latitude, as the liner notes mention, and the Horvath way seems much in keeping with the works and their potential.

So it all comes across as music with powerful impact. In Horvath's hands these are convincing torrents of pianistic energy! Bravo!