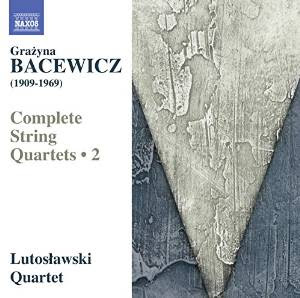 Here we are in the middle of the second decade of the new millennium. We've finally gotten comfortable with the spelling of the word millennium, things are moving on towards a new age of some sort, yet the 20th century has not yielded all its charms to the bulk of us. Not yet.

An excellent example of what we are uncovering can be found in the recent release of the Complete String Quartets 2 of Grazyna Bacewicz (1909-1969) (Naxos 8.572007) as played by the Lutoslawski Quartet. It is the concluding volume of the set that so vividly conveys the exceptional worth of the seven quartets, in its very considerable renditions of her String Quartets No. 4 (1951), No. 2 (1943), and No. 5 (1955). (See the August 26th posting for the review of volume 1.)

Volume 2 affirms the high quality of all the quartets, as volume 1 partly revealed. These are indeed gems of 20th century chamber music, unknown to most of us until now. It shows a Grazyna Bacewicz of excellent craftsmanship and high invention. Each quartet occupies a world unto its own, and the sum total is impressive indeed.

Based on the fine performances of the Lutoslawski Quartet in the two volumes, Bacewicz's Quartets occupy the highest levels of expressive achievement in this genre, rivaling Bartok, Carter and Ligeti in their own way. They bear the stamp of Bacewicz's position in time, with each being a reflection of where she stood in her stylistic development. But none sound transitional or tentative. Each is fully satisfying, complete.

The liner notes tell me that the Fourth Quartet has been one of the better known in the cycle, and there is good reason why it might have gotten attention. It has commanding thematic content. Yet Nos. 2 and 5 do not feel the lesser for it.

They show a composer very familiar with the string instruments and what they are capable of, a great sense of fluency, a modernism that is not as radical as Carter's, surely, but there is a tempered lyrical robustness to her quartets and a general sense of synthesis of the entire century's advances up to each point in time--and an expressive four-part facility that is second to none.

And that I can attest to by the evidence of my ears more so than some analytic acumen one might get with score in hand and plenty of time and space. That isn't needed to appreciate the worth of these works, because their beauty and eloquence are very much available to the careful listener.

If you value the celebration of exceptional women composers, and who does not, and if the string quartet is a genre you love, or even if you are simply in search of composers who deserve your attention, this set is essential. And for Bacewicz lovers already initiated, it goes without saying that these will broaden your appreciation considerably. They are gems and the performances are on the highest levels! Seek no further if you seek something "new" and excellent to enliven your everyday world right now. Modernism in the 20th century has yielded more treasures! Who knew?