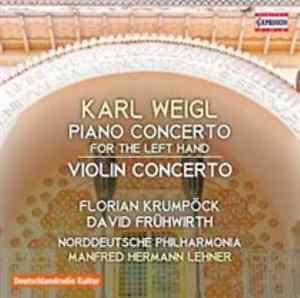 Karl Weigl (1881-1949) was one of the leading lights of Vienna before WWII and his Jewish status put him in danger. He fled to the United States like a good number of other composers fortunate enough to get out, where he taught and composed until his death in 1949. Unlike some others his reputation was shrounded in relative obscurity. It is only in recent times that his music has begun to be performed again.

But in the Vienna of his younger days he flourished. He studied with Alexander Zemlinsky and Robert Fuchs, became a vocal coach during Mahler's directorship of the Vienna Opera, and his works were performed and acclaimed in the years that followed.

Other than a CRI LP recording of his songs that came out in I believe the early 1980s, I have heard nothing of his music until now.

That all changes with a fine recording of his Piano Concerto for the Left Hand and his Violin Concerto (Capriccio 5232), performed by the Norddeutsche Philharmonie Rostock under Manfred Hermann Lehner. Florian Krumpock and David Fruhwirth happily take on the solo piano and violin roles, respectively.

The music is in every way deserving of our ears. It is post-Brahmsian, tonal with few modernist traces. But it is music of high craftsmanship and beauty. The works were written in 1924 and 1928, respectively, when Weigl was at the height of his career. And they seem exemplary and significant to me.

The "Piano Concerto for the Left Hand" was one of those commissioned by Paul Wittgenstein after an injury in WWI left him without his right arm. Thus Weigl joined the illustrious company of Prokofiev, Ravel, Britten, Hindemith, Korngold, Schmidt and Richard Strauss to receive a commission. Wittgenstein never performed the Prokofiev or the Hindemith works, which were too modern and incomprehensible to him, but for some reason he did not perform the Weigl concerto either. Incredibly it went unperformed until 2002, when Florian Krumpock gave its world premiere. So it is fitting that he is the soloist for this recording.

It is a work of glowing lyricism and depth, notably missing the sturm und drang of his late romantic counterparts but in no way lightweight in substance. Weigl might well have triumphed if the work had been performed at the time. Nonetheless we are well served by the modern-day recording with soloist and orchestra giving the work a very spirited and sonorous reading.

The Violin Concerto fared somewhat better in the day, getting one performance in 1930, whether well-received or not I do not know. It received several performances after Weigl's death but did not get any significant attention again until 2009. David Fruhwirth gives it a marvelous reading on the present recording, as does the orchestra. Like the Piano Concerto it is on the neo-classic side of romanticism, in that there is a contained expressive content that plays out as part of the work's tripartite form. So we get more Brahmsian symmetry than Straussian maelstroms of expression. Yet for all that Weigl does not sound at all derivative.

What matters is the quality of the music, which is a revelation to those of us that know little of Weigl. He may not have been the leader of a new music movement in his lifetime, but the two concertos have very much a life of their own and sound fresh and appealing to present-day ears, mine anyway.

There is nothing lacking in the performances and the sound quality is of the highest order. Here is a modern composer of definite weight, not certainly a part of the progressive modernist movements going on around him, but that matters little at this point.

This is Weigl in very persuasive terms. The music brings much to us. He did not deserve such neglect. Listen and I think you will agree.