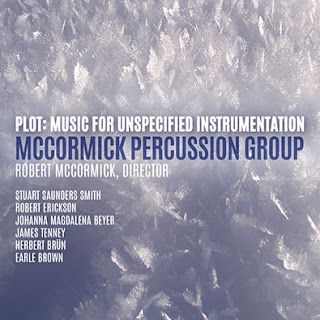 Works for percussion ensemble have evolved over the years, so that at times the idiomatic sorts of music like "Ionization" by Varese or early John Cage works have been supplemented by music that claims its sound parameters in less percussion-precise terms. On the edge of this is music that could be played by percussion instruments or any combination of instruments whatsoever and further, music that does not have any one set of possible outcomes, but depends upon a particular realization in the performance setting.

The worthy institution of the McCormick Percussion Group under Robert McCormick has devoted a two-CD set to these sorts of works. Plot: Music for Unspecified Instruments (Ravello 7916 2-CDs) gives us a fascinating look at seven such examples, the most famous being Earl Brown's "December 1952" but there are a diverse set of possibilities included on the program, which covers a wide time period between 1935 and 2010-11.

The pitch versus the unpitched percussion instruments give us of course two different possible worlds of sound. And in the end in such pieces the unpitched do increasingly get perceived in their never-absent pitched possibilities, though it is a matter more for perception than special intent given the parameters of the works.

The universe of possibilities gets various realizations: "Bones" (2000) by Stuart Saunders Smith consists of "melodies and piano music," with the order, tempo and dynamics subject to improvisation.

"Nine and a Half for Henry (And Wilbur and Orville)" (1970) by Robert Erickson deals with tapes capturing the sounds of engines and machinery with the musicians instructed to relate freely to those sounds.

"Percussion" (1935) by Johanna Magdalena Beyer has specific written parts and is part of a body of diverse works by this most neglected composer.

"Percussion Responses" (1964) by James Tenney consists of graphic notation for a number of percussionists in interaction with Tenney's electromagnetic tape of computer generated sounds, "Ergodos II."

"Plot" (1967) by Herbert Brun is a graphics score for solo percussionist with specific choices on the part of the performer in terms of instrument, method of sound production, timbre and "sound connectivity."

"Pacific Sirens" (1969), yet another work by Robert Erickson, uses electronically transformed sounds of the surf with specific instrumental reponses for a continuous "siren song."

"December 1952" (1952) is Earl Brown's historic, graphically notated score meant for improvisational use by any number and combination of players, here in a realization for vibraphone and piano.

Finally, "Winter" (2010-11) by Stuart Saunders Smith, consists of a large array of "musical ideas and through-composed solos" that an unspecified number of instruments make use of by "recomposing" the sequence and content in any given performance.

That is the run-down of what this anthology contains. Most of these works would sound very different in content when performed by other players at other times. The McCormick Percussion Group thus puts their own personal stamp on this anthology to perhaps a much greater degree than they might with works that presuppose a set instrumentation and notation sequence.

That they succeed in providing us with a long program of definitive interest and atmospheric presence is a testament to the group and Robert McCormick's sympathetic and very creative artistry. Perhaps ironically the music has a kind of wholeness that mostly exists outside the personalities of the individual performers, an ensemble cohesiveness that is more than the sum of the artists involved. This in a way is the opposite of jazz improvisation, which typically demands a stylistically individual response with the emphasis on sound-personality fingerprinting.

The anthology fascinates and beguiles consistently as it also challenges the listener to come to grips with the form and structure inherent in the freedom these works provide. It is as liberating in its own way for the listener as it is for the performers. Bravo!