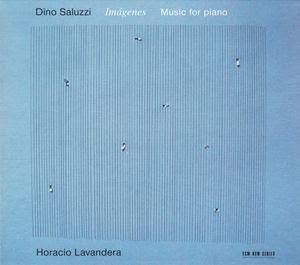 Celebrated Argentinian bandoneonist Dino Saluzzi (1935-) has written occasional music over the years that exists alongside his primary bandoneon ensemble music. For example between 1960 and 2002 he was written a goodly assortment of music for solo piano. We get a fine selection of this on his Imagenes: Music for Piano (ECM New Series B0023792-02), as played with care by Horacio Lavandera. These works have never been recorded before. The disk comes out in celebration of the composer's 80th birthday.

The works are sometimes reflective, rather impressionistic essays with touches of neo-romanticism and at times a Satie-like lyrical simplicity. There are also elements of Argentine traditions that come to the forefront on occasion. But in the end, as Saluzzi says, "music is one." And so the total effect is of a music not easy classified. Modern, yes, classical, certainly, but occupying a space of its own, reflective and with a feeling of solitude often enough, but then there are pieces of bright activity, too. And in the end there is an originality.

Pianist Horacio Lavandera brings to the music a poetic flare, an interpretive acumen and beauty of touch that is totally right for the music. The ECM production gives us a glowing piano presence that creates an immersive staging, setting this music off nicely.

The album has much to recommend it. Saluzzi gives us an original voice that neither follows well trodden ground nor does it live in the contemporary moment. There is something of a timelessness to this music, beyond a present and a past, a pure and lyrical Saluzzi that expresses his musical self elegantly and pristinely.

I recommend you hear this music.