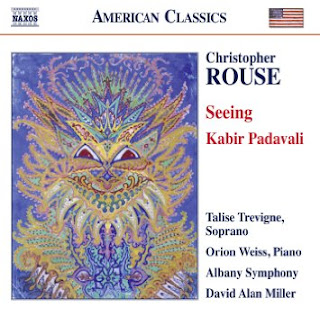 Perhaps an excellent test for a recording of works of modern complexity is if on a few listens it remains vividly etched in the mind in spite of a period of highly distracting everyday situations. That's the case for me with American composer Christopher Rouse and his world premiere recordings of Seeing and Kabir Padavali (Naxos 8.559799). Both works were written in 1998 and feature the Albany Symphony under David Alan Miller.

"Seeing" is a piano concerto with Orion Weiss effectively attacking the solo part. "Kabir Padavali" is a setting of texts by Indian poet Kabir and features Talise Trevigne in the soprano solo role.

"Seeing" was commissioned for Emanuel Axe and the New York Philharmonic. In discussions with the composer before the work was composed, Emanuel revealed that he never planned to perform Robert Schumann's celebrated "Piano Concerto" out of a feeling of modesty. The composer as a sort of humorous aside dealt with a few motifs from the concerto as he began writing the work. The composer was searching his mind for an appropriate title for the work when he by chance came across an old rock recording in his collection, namely Moby Grape 69. As he listened again after a number of years he was struck by the final track, "Seeing," written by the group's guitarist Skip Spence. A chance encounter with a book on rock history shortly after revealed to Rouse that Spence had become incurably psychotic and was institutionalized.

Given Schumann's mental illness a pattern became clear to Rouse, and the result is that "Seeing" is thematically centered around sanity and the lack, on the world as seen through the eyes of mental illness. There are occasional quotations from Schumann's concerto but on the whole this is a work that emphasizes extremes in consonance and dissonance. It is a brash, exciting work with some fiendishly difficult and extroverted piano expressions and an orchestral give-and-take that magnifies and comments on the piano's role in a hugely expressive, rather unforgettable manner. The effect is ultra-modern and extraordinarily dynamic. Weiss and the Albany Symphony under Miller give the work life in beautiful ways. It is a modernist blockbuster!

The second work, "Kabir Padavali" is highly contrastive, modern in a more reflective way, dealing with the poet Kabir's imagery and musings on the world, on music, on life from an Indian religious point of view. Ms. Trevigne gives her part a lovely reading. The music complements "Seeing" as a very different mood piece, more searching than gestural, but equally vivid in its very evocative unveiling through time.

It is an album of considerable interest. The world premiere performances do the music justice impressively and it shows us two sides of the masterful Christopher Rouse that brings his considerable orchestral acuity to the forefront while creating piano and soprano solo roles that stand out for their marvelous construction and affective interactions with the orchestra.

Christopher Rouse is an essential composer in the high modernist camp. This volume gives you two excellent examples of his music, played with zeal and precision. Highly recommended!