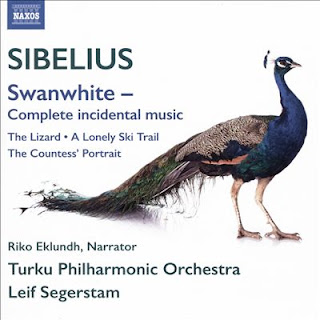 The uniqueness, almost stubborn uniqueness of composer Jean Sibelius (1865-1957) is something we can perhaps marvel at today. He was determined to go his own way during his most productive years, for a large potion of the 20th century. He produced seven symphonies, a violin concerto, and tone poems, which have gained a sort of immortality from his own time through to the present. He was the voice of Finland, not quite neo-romantic and not modern with the stylistic traits we generally identify under that name, totally himself yet in a very Finnish sense, without trying to put too fine a point on it.

But not all of his music is well known. Leif Segerstam and the Turku Philharmonic Orchestra have been devoting time and care to recording some of the lesser-known orchestral works, principally incidental music, in a series of releases for Naxos. I covered one a short while ago (use search box above to find that) and now another: Swanwhite -- Complete Incidental Music and others (Naxos 8.573341).

We get some very attractive tone painting from the early stages of his career for the most part. The influence of Grieg can sometimes be discerned, otherwise this is proto-Sibelius that speaks on its own terms. He most certainly shows his brilliant orchestrational genius in embryo here. And the music sings out dramatically and attractively.

The performances are quite good, sensitive to the sweep of Sibelius's grand natural gestures. The music may not be quite at the high point of mature Sibelius, so perhaps this is not the place for the listener to start with the composer if one does not already know him. But for those convinced Sibeliphiles it is all very nice to hear, something you will want to have.