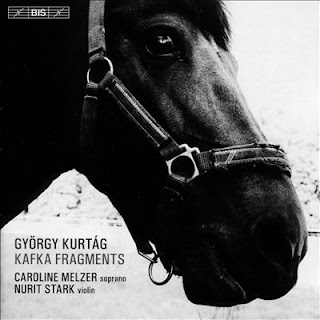 Franz Kafka created an alternate world in his writings that was like no other, parallel to the reality he lived within and in many ways a displacement of the disconnects and disregards we all can be subject to in a modern nation-state world. It was virtually hyper-real and so vividly colored by his imaginative scenarios that we see in modern life something we have perhaps been trying not to notice, but can be of course very much there.

Composer Gyorgy Kurtag has taken a series of textual extracts from Kafka's diaries, letters and unpublished stories and made a long song cycle of them for soprano and violin, Kafka Fragments (1985-87) (BIS 2175).

It is a stark landscape musically and textually that Kurtag sets for voice and violin alone. The music parallels the texts with moments of agitated expression, a ruminative bleakness and many shades in between. The violin part is filled with double stops and a modernity that gives the music at times echoes in familial relationship to Stravinsky's "L'Histoire du Soldat" in its folk-fiddling avantness. But here the "fiddler" and the vocalist are very much alone, fitting to Kafka's uncanny point of view and his unrelenting probing of existence, demanding answers that are not forthcoming.

The 40 separate fragments are generally quite short, a minute or two for each with a few running longer, six or seven minutes. Each is a word-song picture that sets its mood and then is gone.

Soprano Caroline Melzer and violinist Nurit Stark immerse themselves in the score with an explosive expressiveness and a contrasting reflectivity that seem just right for this music. It is all very much in a modern post-serialist mode, brittle near-lyricism countered by a hard expressivity not untypical of Kurtag in this period.

The music stands on its own as something very much unto itself. There is nothing quite like this out there. That in itself is saying a great deal. It is an unforgettable work, a fitting analog of the Kafka sensibility set in tone.

It demands your undivided attention and rewards with stunning, uncompromising exploratory probings. There is a seriousness of purpose here that is unrelenting and all the more memorable for it.