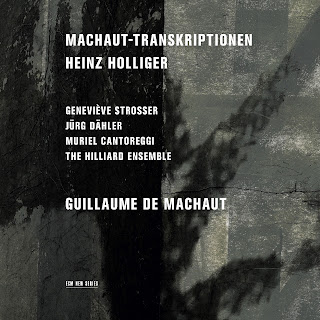 The modern music arena, like the modern visual arts scene, may frustrate you if you have one rigidly defined set of features that you apply like a grid over everything new you experience. Half the time or more, the music may evade your definition and yet be worthwhile and even important. You get more out of the explorations when you approach new music on its own terms, one work at a time. Only then may the various patterns emerge alongside one another, though of course everything is changing, mutating, going forward month-to-month.

Much commentary on the scene tends to freeze that ever-evolving whole in order to describe the situation on the ground at x point in time, but of course the natural way is that it continues to move forward. That is hard to put into words so long as there continues to be an opening up of the future that is the opposite of a one-style dominance. And we are most definitely in a very creative, generative period in the times in which we live.

The new recording by Heinz Holliger is nicely symptomatic of a branch of the process of contemporization right now. Machaut-Transkriptionen (ECM New Series 2224) makes use of the famed Hilliard Ensemble vocalists and three violas to resituate a cycle of works by 14th century early music master Giullaume de Machaut.

This is a further example of the old-in-the-new, the search for convergences of early and modern musics that Stravinsky did with Gesualdo, Lukas Foss and his "Baroque Variations" exemplified in the '60s for a later period of early music, then Penderecki reaffirmed in very different ways in his vocal works beginning with his early-mid period. More recently of course Arvo Part came on the scene with a distinct style that contained some definitive transformations. He has rightfully been made much of in the late-20th century through to today. But the process by no means ends at Part. It continues on and Holliger is among the prime movers as we hear on this album.

Holliger's refiguration of Machaut takes the four vocalists and three violists increasingly across time from early to late, at the same time interjecting his own musical vision yet situating it within a world first sourced out of Machaut's subtle part-writing and periodistic spatiality.

The music is impeccably performed, captured beautifully and has a dramatically transformative trajectory that gives us a sonic momentum as contentful as it is moving. It is first-rate early-to-modern music and a great example of why Holliger occupies a special niche as a present-day innovator.

Hear this and be a part of the contemporary developments going on out there. Very recommended.