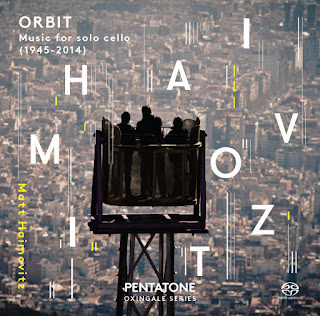 After celebrating Matt Haimovitz's recent recording of Bach's unaccompanied Cello Suites (see October 13th posting) I was reminded that I had planned to cover his earlier unaccompanied cello anthology, Orbit, Music for Solo Cello (1945-2014) (Pentatone Oxingale Series 5186 542). So I fished it out from the pending stack and gave it a number of close listens.

What Haimovitz did for Bach (and also Beethoven, see earlier posting), so he does for a wide spectrum of the modern repertoire, not of course so much make them period specific, since this IS the period we are in, but to make the music an extension of himself.

We get three full CDs of a wide assortment of modern works by the likes of Philip Glass, Luciano Berio, Gyorgy Ligeti, Elliott Carter, Luigi Dallapiccola, Steven Mackey, Tod Machover, Ned Rorem, Lewis Spratlan, and a host of others, some lesser-known, but all somehow expressing the modern classical idiom in all its variant guises. We even get a Haimovitz arrangement of Jimi Hendrix's famed solo guitar version of the "Star Spangled Banner" and a solo cello version of the Beatles' "Helter Skelter."

This is a treasure trove of solo cello as it has flowered in the modern present, which started in part from a respect for Bach's "Suites" by artists like Max Reger and Paul Hindemith in the first half of last century and continued on into high modernism and the contemporary music of recent years. The cutoff beginning point of 1945 means that we do not hear the earliest examples of the solo renaissance, but that I hope can be the subject of another anthology down the road.

No matter. There is more than enough to appreciate in this set. These are works that are sometimes fiendishly difficult, always advancing the cello into our world. Matt Haimovitz has fabulous technique and a very intelligent and impassioned interpretive bent. This is an opportunity to express what the zeitgeist is all about today in cello terms. Whether it be the abstract heights of Ligeti and Carter or the post-modern lyricism of Philip Glass, Matt gives us tour de force mastery and a flow that belies the sometimes rapidly shifting manners of articulation.

The sheer variety of the modern repertoire when taken in its widest sense as it is here and the beautiful outpourings of Matt Haimovitz's cello in mastering and making cogent the many stylistic variants give us a remarkable extended program. This is manna for cello lovers, infinite stimulation for any serious modern chamber enthusiast, and just plain wonderful for anyone with a sense of vastness and exploration that the modern musical world affords. Very recommended!