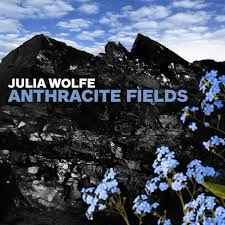 Minimalism today. Are there as many versions as there are composers? Possibly. It is still one of the principal modern idioms in classical music, of course, but it is for many a different thing than it was during its classically hypnotic phase of the '70s and early '80s. Take Julia Wolfe. Take her Pulitzer Prize winning composition Anthracite Fields (Cantaloupe 21111), enjoying its world premiere recording by the Bang On A Can All-Stars and the Choir of Trinity Wall Street under Julian Wachner.

Julia grew up in a small town in Pennsylvania not far from a once thriving anthracite coal mining district, which had its peak at the turn of last century. Anthracite Fields is a kind of homage to the miners and their difficult and dangerous toils. In five thematic movements the chamber ensemble Bang On A Can All-Stars joins with the Trinity Wall Street Choir for a textual thematic unity. The movements are "Foundations," "Breaker Boys," "Speech," "Flowers," and "Appliances." The chamber group consists of cello, bass, keyboards, drums, guitar and clarinets, two of the instrumentalists adding their vocals. They straddle classical and rock modes, mostly more or less straightforward minimalism for the bulk of the music.

Like her "Steel Hammer" (reviewed on these pages; see search box) Wolfe utilizes text phrases that form the centerpiece of meaning for each movement. So for example the names of miners who were on the accident index during peak years are sung out in mostly unison in a measured chant-like periodicity. For its repetitive core the names are limited to those who had the first name "John." The unison has then a counter-melody that enters in about halfway through. "Breaker Boys" deals with the young workers who removed debris from the output of the coal-bearing shutes, a physically painful task. "Mickey Pick Slate" and other children's game rhymes form the core texts. "Speech" makes use of a speech made by the United Mine Worker's President John L. Lewis about the hard lives of sacrifice made by the workers so that Americans could live comfortably. The remaining two movements proceed in similar fashion. In the repetition of phases from the various textual sources a minimalist matrix is built up for each movement.

On a meaning level, all of this is very moving. There is a deliberate banality to the music itself, in its use of unisons, thirds and simple diatonic phrases. Most of them have little in the way of musical interest and the effect is to focus the listener on the texts and create a simple consonance that has life mostly through rhythmic treatment. The repetition does not mesmerize. It repeats.

I appreciate this work for its commitment and often find parts invigorating. At other times I will admit to you that there is a deliberate tedium that is, well, tedious. I cannot blame Julia Wolfe for the intervalic elementalness of the music. That is her choice. It must appeal to a wide number of people because of the simplicity, but after a time and with repeated hearings I find myself wishing for a little less sing-song. Of course if sing-song is her aim, she succeeds! One could argue that the banal repetition corresponds to the repetitive labor, and that's fine. For that it can be easily appreciated and grasped on first hearing by the least musical among us; but repeated hearings do not yield a great deal of heightening, not for me. It stays where it was and does not budge.

I realize that this is my problem and that the work evokes the tragedy of this way of life quite well, but at least half of the music content I do not engage with readily. And the repetition seems not entirely chant-like, which would be fine, but at times too darned banal to interest me. That banal simplicity may appeal, I grant it, just not as much to me.

Since it won the Pulitzer Prize this year, there are obviously those who feel that it is worthy. I congratulate Ms. Wolfe for a very dramatic statement. And I generally like her music. This one is very good to hear, but much of it seems in the end uninteresting to me. Musically it does not move me, mostly. You may feel differently. Sorry.