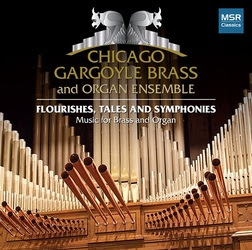 This time of year puts me in mind of brass choir and organ. That of course has to do with the upcoming holiday season and the coming of winter. If you crave the enormous and sometimes enormously subtle massing of such forces, there is a new CD out that puts you in front of an excellent group, The Chicago Gargoyle Brass and Organ Ensemble, with founder and artistic director Rodney Holmes. They tackle a wide variety of music on their Flourishes, Tales and Symphonies (MSR 1598). The Gargoyles are in fine fettle, joined now and again by a timpanist.

Understandably most of this is music of the grand gesture. Much of it is music I am not familiar with, by contemporary composers who have a flare for the grouping at hand. So we have Carlyle Sharpe and his "Flourishes" (2005-2010), and also his "Prelude, Elegy and Scherzo" (2012); William White and his five-part suite "The Dwarf Planets" (2012); David Marlatt's "Earthscape" (2011); and Peter Meechan's "Velvet Blue" (2012) a bluesy pulsating adventure ultimately in a sort of jazz-rock mode that adds drum set and gives us an unexpected treat.

For somewhat earlier sounds we get a 2013 arrangement of Jaromir Weinberger's "Polka and Fugue" from "Schwanda, the Bagpiper" (1926) and a nice arrangement of the "Adagio and Maestoso" from Saint-Saens' "Organ Symphony" ("Symphony No. 3") that first saw the light of day in 1886.

The modern works are tonal and very idiomatic for the instrumentation. Everything fits together well. The fabulous musicality of the Gargoyle Ensemble is matched by a bright, exciting recorded sound that does justice to the dynamics and grandeur of the performances.

It is some repertoire you will not always know and so it is a real addition for those who need to clear out the cobwebs in one's listening space with something very new! This is an excellent disk and great fun as well. Grab it and get prepared for some fireworks of sound.