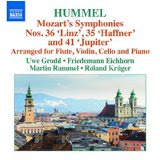 There are times when you need to take a break from the hurly-burly, to freshen the senses with something completely different yet familiar. That would seem to me a good time to put on the Hummel Mozart's Symphonies Nos. 36 "Linz", 35 "Haffner", and 41 "Jupiter" Arranged for Flute, Violin, Cello and Piano (Naxos 8.572842). These of course are some of Mozart's most celebrated later works in a chamber setting, with his illustrious pupil Johann Nepomuk Hummel doing the arranging.

The music appears in an exposed setting, displaying all its charms but pared down to the essentials. Hummel does the reframing with subtlety, using the piano as a fulcrum point as he well would have if the quartets were composed of his music, and nicely scoring the flute, violin and cello parts to make the music sing wonderfully well. There are some nice Hummel touches here and there that remind us he was moving in early romantic circles.

The parts contain plenty of brio--and a virtuoso side that brings elements into closer focus. The present recording features Uwe Grodd on flute, Friedemann Eichhorn on violin, Martin Hummel on cello and Richard Kruger on piano. They are zestily declamatory when called for, sweetly tender at other times, and in short give the parts an exuberant motility and inspired enthusiasm perfectly suited to the music.

Of course most anyone hearing these arrangements are intimately familiar with the Mozart symphonic originals and so can envision their micro-adaptation to the chamber ensemble with a sort of immediacy. The themes, the passagework, the perfection of the music is still there only there is an at times a Promethean triumph of quartet over the struggles of making this music truly breathe under new circumstances.

The result is pure delight, I suppose you could say. It is a full CD of real fulfillment. There is an earlier volume out with the same premise but of course different symphonies. Start with this one, though. Then if you need more there is that.