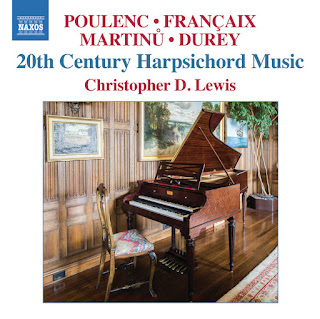 The idea of the old-in-the-new is not new to the later 20th-early 21st centuries. It has been with us I suppose as early as composers who used Plainchant for cantus firmi in their polyphonic masses. The full-fledged Bach revival in the romantic era and a renewed attention to counterpoint that followed would be another example.

And yes, in the height of modernism-as-new there can be found such things. 20th Century Harpsichord Music (Naxos 8.573364) by Christopher D. Lewis gives us a nicely chosen anthology of modern-era composers who in one way or another responded to Wanda Landowska's resurrection of the harpsichord beginning with her collaboration with Pleyel in creating a modern version of the instrument between 1905 and 1912, and then thanks to her concertizing and recordings made everyone aware again of the sound world the instrument could produce.

Modern works followed. Lewis picks five mostly early modern composers and six works, all of which have something of an earlier-meets-later quality to them. All the works are in a tonal mode, and all owe something in their makeup to the baroque in the way the music is structured, be it contrapuntally or in terms of quasi-dance forms, etc.

So we get some works-composers that are known to many, some less so, but all worthwhile and well performed. Francis Poulenc's lovely "Suite Francaise" leads off the program. It is followed by "Deux Pieces" (1977) by Jean Francaix, three works by Martinu and one suite by Louis Durey (1888-1979).

All of the music has a neo-classical quality. The hearing of the variety of works is enlightening and very enjoyable. Christopher D. Lewis does a fine job. I recommend this set for the music and performances, to anyone with a sense of exploration and appreciation for the treasures of 20th century music but also with an itch for the old-in-new possibilities that the pre-post-modern era can provide. An excellent program is to be had here.