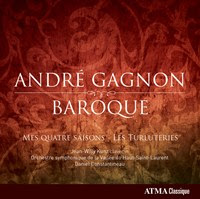 My Monday dawns as I listen to the newly recorded Baroque (Atma Classique ACD2 2715), a compendium of modern-day works written in the baroque style by Andre Gagnon. It suits my need for something positive and bracing in a world I at the moment find somewhat loathsome. I am reminded of an old friend who stopped listening to the avant garde many years ago with the comment that he "already felt terrible and the music just reinforced it." Of course you do not go to the Museum of Modern Art and expect to find happy, chipper things, so why then must music always be that? If music is solely something to enhance your mood, then he may be right. But if you seek that sort of thing you may end up listening to musak or new age, ultimately, or what used to be called "easy listening."

It does not wash to me; ideally music is not made for you to wallow in like a pig in the mud. For that same reason the MOMA is not as yet filled with 1,000 happy faces on canvas. And yet I am glad to hear this music right now on this Monday because it is well made, inspired, even if out of season for what you expect a composer to be doing in these present day circumstances. One swallow does not make a summer, though, so we can have this music without fear that it will somehow negate everything else we call "modern" today.

The fact is that Andre Gagnon's new baroque music is very engaging. The music was written in 1969 and 1972 and originally recorded for release by Columbia records in two albums where, as the liners tell us, they did well.

The new recording uses all period instruments (that is of the baroque period) and gets a nicely brio reading by Daniel Constantineau conducting the Orchestra symphonique de la Vallee-du-Haut-Saint-Laurent, with Jean-Willy Kunz on harpsichord. (The original recordings had the keyboard part played on the piano, so this too is a more authentic period touch.)

The music consists of four sets of suites corresponding to the four seasons, "Mes quatre saisons." Then there are the "Les Turluteries Suite"(s) No. 1 and No. 2. It is remarkably baroque in form, in its contrapuntal part writing, its bright emotional range and its treatment of themes. The music has plenty of invention to it. It may not have quite the depth of a JS Bach, but that was as much true of most baroque composers in the day as well, of course.

The originality of the music, and what perhaps makes you think of the modern day if you listen carefully enough for it, is in the thematic material. It is generally lyrical, and not always characteristically baroque. That makes this music much more than a clone of another era. It is a product of today in the end. But even if you do not pay as strict attention to the thematic play it is music of real substance.

Should a composer do such a thing in our world today? Why not? I might be alarmed if all contemporary composers went baroque in this way, but that is not the case. And if the music satisfies without pandering to mood, listeners are all the better for it.

The performances are convincing, lively, and very musical. And the music itself rings true. So I do recommend this one strongly.