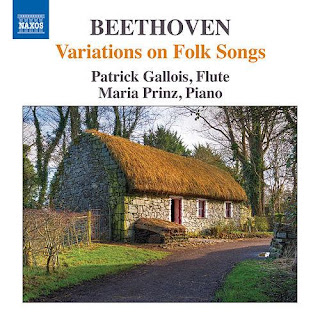 Classical composers before the advent of nationalism in the 19th century utilized folk songs and popular songs in various ways, but usually not strictly in terms of a regional approach. Renaissance composers sometimes used a folk or popular theme as a cantus firmus or in other ways in a mass or other contrapuntal work. "L'Homme Arme" was utilized in this way by Josquin des Pres and a fair number of others. The melodic underpinnings may not have been easily recognized by most listeners at the time, as they are not generally to us in an non-analytical listen either.

And then there was the arrangements of folk melodies for variations later on. There was generally a pan-regional approach in what was chosen, whether it was a mix of Scottish and Austrian, for example, or any number of possibilities.

Beethoven was called upon to do this. And we have the fruits of the practice in his hands on the new release Variations on Folk Songs (Naxos 8.573337). The program consists of the op. 105 and op. 107 variations, scored for piano with an optional flute (and later violin) part. Since the flute part is somewhat elemental, flautist Patrick Gallois prepared performance scores of the music that added ornamental and other improvised passages that would have been typical of contemporary practice. Patrick appears here in the flute role along with Maria Prinz at the piano.

These were commissioned by folk enthusiast and amateur musician George Thomson, who intended the published versions to serve as a popular diversion for use in the homes of less-than-virtuoso musical families. The programs were meant to please and give melodious fare for home gatherings, and he specifically instructed Beethoven to proceed accordingly. Beethoven was in a peak later period and only partially accommodated Thomson: at times the piano parts are a bit more virtuoso oriented than a strictly beginner-intermediate pianist could handle with ease. All the better for us.

Patrick Gallois and Maria Prinz provide us with bravura performances of the two collections, both melifluous and nicely detailed given the performance version of Patrick's. There are sixteen folk melodies in all, Scottish, Irish, Welsh, Austrian, and Russian in origin.

Beethoven as one would expect is enormously inventive in his variations. In those days composers of any greatness gained a reputation for creating such inventions impromptu, sometimes via a theme suggested by someone on the spot. It at times formed a diverting part of their concertizing if they were keyboardists, as of course Beethoven was. Mozart, Bach and Beethoven, for example, were renowned in their day for such things.

The combination of jaunty folk melodies and variational inventive near-brilliance carries the day as played so well in this elaborated performance version by Gallois and Prinz. These are not performed as often as some of Beethoven's other variations but they do stand up to our scrutiny as very listenable and well-conceived miniatures. Not perhaps Beethoven in the monumental sense, but a very nice 72 minutes to get a break from heavier fare. Very recommended.