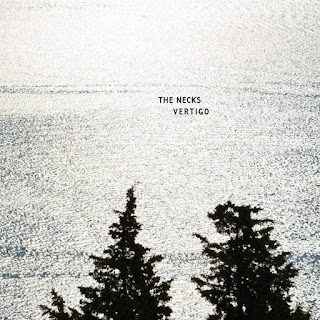 The Australian keyboards-bass-drums trio known as the Necks have been going at it for decades, crafting a unique and varying amalgam of composed-improvised music that at times veers firmly into the territory of minimalism, other times into a sort of new music-jazz that has ambiance and petal-point drone underpinnings and sonically avant elements. They are not necessarily doing "classical music" per se but then they defy categories. I've covered one of their albums on this blog (type "Necks" into the search box above to access that review) and today I am taking a look at their newest, their 18th album to date, Vertigo (Northern Spy LP or CD).

Tony Buck (drums), Lloyd Swanton (bass) and Chris Abrahams (piano and keys) create for us one long, 43-minute journey into atmospheric realms. It has a few sections where the piano repeats a motif or chordal sequence with a sort of rubato openness. Towards the end there is a recurring drone and chord cycle with added sounds that has a hypnotic aspect. The rest either implies or states a drone and either creates tonal and/or extra-tonal ambiance atop it.

The music has a feeling of spontaneity within a controlled flow. There is a unity to it all but never a feeling of static sameness.

It is music with a striking way about it. The sound-color blend proceeds in ways the Necks do so well. It shows continued growth in the group's overall concept, going decidedly away from a typical minimalist approach into something ever more soundscaped.

Is it their best album? I wouldn't say that necessarily but it is quite cosmically sound, one of their better efforts, and you could do worse if you've never heard them before. Necks devotees will doubtless not be disappointed. I certainly was not myself.

The album has a street date of the end of this month (October, 2015). You can pre-order it at Bandcamp. Copy and paste the following url into your browser address box to do that: https://thenecksau.bandcamp.com/album/vertigo