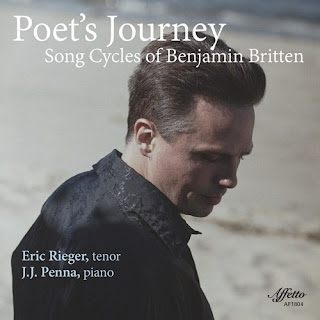 As I get further out from my initial and then ongoing fascination with  the music of Benjamin Britten, which began for me around 1984, I realize that his stature slowly grows with me and perhaps with the music world at large despite how he never troubled himself to fit squarely into the paradigm of Modernism the way people tended to understand it around, say the seventies, an important time period for my second formative growth into the appreciation of music as a whole.

It is not that anyone who learns to know his music would mistake what he does for some pre-Modern aesthetic view exactly, for he is of our times as much as anyone. Like for example Melville in literature, he is in the current of his times but as predominantly himself and not as a member of the influences-pooling collective so to say.

Does his gayness have something to do with that? I would say no, not centrally so since Vaughn Williams espoused a similar, rather stubborn individuality in his very own way. (And he was not gay.) Perhaps it is the Englishness that asserts itself in both cases--not so much a nationalism per say but an assertion of identity that is pre-international so to speak.

I feel all of this again as I get familiar with a recent volume of his music, Poet's Journey: Song Cycles of Benjamin Britten (Affetto 1804). Eric Rieger is the tenor for this program, J.J. Penna the pianist. Both are superb in their readings of the Cycles, and you feel a distinctive presence of another vocal approach not so much like Peter Pears, who of course so profoundly took Britten's music on as his own and asserted a way of singing Britten that all who listen deeply to the composer find a part of how they hear the vocal music. And what Rieger does with the cycles is more operatically vibrato-centric, and that is not in the end a bad thing when you become accustomed to it. It is dramatic, certainly, and it surely works on a music level. It is in the end though stylistically slightly apart from the Pears Britten. All well and good.

The three Cycles performed here are substantial and I am glad to get to know them. They consists of "Seven Sonnets of Michelangelo" (1940), "Winter Words" (1956)  and "The Holy Sonnets of John Donne" (1945). These are early to mid-period Britten, fully himself, with that trademark synergy of text and tone, that inimitable original organicism one hears with joy in the operas especially.

For those who already love Britten this one would be very welcome, I would think. I feel that way. Those who do not know Britten might do better starting with "Peter Grimes" like I did, but then this is a single volume and self-contained for that. Anyone into the Modern-Contemporary scene would do well to hear this. I am very glad for it myself.