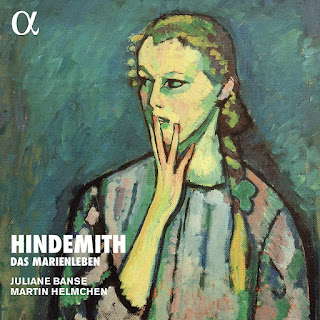 Paul Hindemith's popularity has never exactly waned since his demise years ago, but there was a time when his music was looked upon by some (unfairly I think) as not advanced enough in the Avant Modern sphere. This is somewhat akin to dismissing Bach because he did not stray into Rococo terrain.  At this point what followed Hindemith I would say is in the end no more current than he is, so the whole idea of progress too might as well be discounted. It is irrelevant to our musical outlook in terms of our view of the recent past. So we are free to embrace Hindemith, Reger or even Boris Blacher, or for that matter Zimmermann, or even Stockhausen without resorting to an avant thermometer.

Teleology is a bit passe these days and good for that. The now contested assertion by Victorian anthropologists that the evolution of human culinary art was at last reached with the advent of boiling comes to mind, humorously so. Yet for all that we still make hard-boiled eggs with no regrets, as we also might scramble them too without feeling the least bit old-fashioned, even if nuking everything seemed de rigueur a couple of decades ago.

So it is fitting that there be a new version of Hindemith's Das Marienleben (Alpha 398), the classic Expressionist song cycle based on the poems of Rainer Maria Rilke. The version performed is the revised one completed by the composer in 1948.

And understandably this music-as-recording stands and falls on the merits of the performance. Few would contest the importance of the work itself, at least among Hindemith admirers.  Julian Banse is an extraordinarily powerful soprano presence that brings a brilliant bite to the proceedings. So also pianist Martin Helmchen gives the music strongly expressive and committed musical foundations.

It is very much as excellent a performance of Das Marienleben as I have heard. The music is as masterful as any Hindemith wrote, but it takes a sure voice and piano togetherness and a consistently potent expressive power to make such on the surface difficult music become clear and movingly comprehensible. They very much triumph in the doing so. This version should stand as the present-day benchmark for the work for a long time to come.

And so I do strongly recommend this offering. Banse and Helmchen bring incomparable depth to the music.
Posted by Grego Applegate Edwards at 6:44 AM