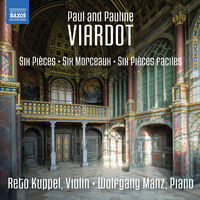 I am never one to shy away from the unknown, and of 20th century France I would never avoid learning something new, so I said "Why not?" when I had the chance to hear and review the present recording of the music of Paul Viardot (1857-1941) and his mother Pauline Viardot (1821-1910). The program at hand is a collection of short pieces for violin and piano (Naxos 8.573749). The performances are flawless and expressive, idiomatic in a kind of sophisticated and melodically rich salon style then current in French cosmopolitan circles from a bit before the turn of the century through to the 1920s. So that is to say that there are very French musical elements present in this music, a folksy charm, a tuneful lighthearted depth. For this there is something about this music that is not alien to Chabrier, Satie or Debussy, each in his own way and that means sometimes of course a way divergent somewhat but the Viardots share this with the others while possibly embodying more fully the salon tradition per se.

And who are these Viardots? The back cover of the CD informs us that both were a part of the Garcia family, most notably tenor operatic star Manuel Garcia, who was Paula's father. They were as a result of the father's fame very much a part of the Parisian society. Paul was a violin prodigy, which only increased their fame. Of course now I asked "who?" when I saw the names, but life  in time handles fame and obscurity with equal indifference and the point is now the music.

All of the music heard on the program is in World Premier recordings. We get Pauline's "Six Morceaux" for twenty minutes of the eighty-some-odd total. It is very pleasing music, more than mere trifles. The Paul Viardot works take up the bulk of the CD and they are miniaturist salon classics with a good deal of violin expressiveness.

None of this music will set the world on fire, sure. Yet it all fills out a place in our understanding of French modernity by furnishing a good, a very good example of the "mainstream" salon-violin music in the modern era. The more one listens the better one likes it all. Like perhaps Fritz Kreisler's violin miniatures it is worthy and characteristic without being some giant leap forward.

Now if you are a devotee of 20th century French music you will want this. If you want something pleasing without being terribly profound you will want this! And it is nice to hear. I am glad of it. Recommended for all the reasons above. It brings back an age we no longer know much of and for that reason it helps us picture the whole scene!
Posted by Grego Applegate Edwards at 9:35 AM