Michael Byron, The Ultra Violet of Many Parallel Paths 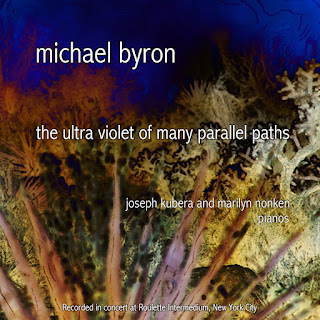 In music as in life things happen, if you are living in the stream of the present. There will always be new music, and there will be always be older new music, still older new music and then music that is not longer considered new. This is a commonplace. It is obvious. Yet when you live in the stream of it all it is far from commonplace and it is in a way always tempered by the great unknown. What is coming? We cannot know for sure.

Yet we can of course know what has arrived. One of those is composer Michael Byron. If you type his name into the search box in the upper left of this page you will find a number of reviews I have written here. I like what he has been doing. And now I have his recent CD The Ultra Violet of Many Parallel Paths (self released). It is in the form of two longer works for two pianos, performed most ably by Joseph Kubera and Marilyn Nonken. The album was recorded in concert at Roulette Intermedium in New York City late last year.

There is something of the Radical Tonality mode inherent in the music. Then again there arises at times a density that is nearly extra-tonal, but never quite.

This is a kind of process music. It starts at one point and gradually goes to another point and in the doing it changes. Both works have a cascading rhythmic anarchy that is pleasingly stuttered, disjointed, expressive Pollockian scatter and splatter. As each work proceeds it increases in rhythmic density, and there is a kind of post-Cecil Taylor freedom expression there that Free Improv fans will readily find congenial. And New Music ears will have no trouble understanding it as well.

The opening work sets out a quasi-pentatonic-diatonic minor  mode in a recognizable scalular pattern that may remind us of Gamelan and other Asian musical sensibilities. Byron then adds additional scalular notes gradually as it becomes more dense and tonally more complex due to simultaneous sounds between the two pianos of scale tones overlapping, creating a kind of increased harmonic consideration.

The second takes to us a kind of whole-tone augmented scalular foundation that splatter-bursts itself from the beginning, that increases in density and continuousness with time and also adds chromatic tones or a chromatic feeling in the midst of the overlap soundings..

The music remains distinct and fascinating no matter how many times you listen. It is very noteworthy, if you'll pardon my pun. I strongly recommend you hear it!
Posted by Grego Applegate Edwards at 8:52 AM

Email ThisBlogThis!Share to TwitterShare to FacebookShare to Pinterest
Labels: michael byron the ultra violet of many parallel paths gapplegate classical-modern review, new music in a processual mode, radical tonality and beyond for two pianos