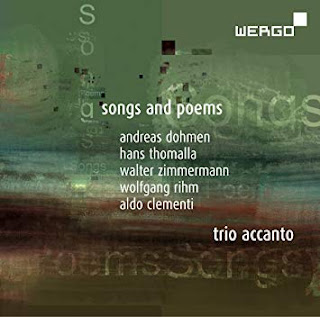 If you on the surface came across Trio Accanto's Songs and Poems (Wergo WER 7364-2) without further looking into it, you might assume that this was a music with vocals. If you listened you would find that these are songs and poems without words, a series of five New Music compositions for saxophone (Marcus Weiss), piano (Nicolas Hodges) and percussion (Christian Dierstein).The Trio Accanto as made up in this way is a very accomplished triumvirate of musicians especially gifted in New Music readings and interpretations.

The five compositions complement one another as they exemplify some of the New Music way stations one can appreciate in the music as it is now. And by that I mean music that is not so much a post-something but instead remains the thing itself, albeit farther down the present-day road and where it has taken us. There is a spectrum of soundings from the dramatic and somewhat acerbic edginess of Andreas Dohmen's "Versi Rapportati" which begins the program, to the last work in the sequence, the rather dreamy piece, the quietude of Aldo Clementi's "Tre Ricercar."

The ebbing and flowing sound color variations on the program is helped along by the shifts in the saxophone specifications from work to work, so from alto/baritone for the first piece we follow along in sequence to tenor to contrabass to alto. Piano is a constant, to be joined by a part for celesta in the final work. And percussion varies from sets of various miscellania to vibraphone with or without  tubular bells.

All of the works fit comfortably into a more or less High Modern pillowcase as long as you remember that what is High Modern in 2018 is not necessarily the same as it might have been in 1960.  So to experience the Dohmen and the Clementi as I mentioned and then in between the Hans Thomalla ("Lied"), the Walter Zimmermann ("As I was Walking I Came Upon Chance"), and the Wolfgang Rihm ("Gegenstuck") is to experience a vibrant, lively and state-of-the-art chamber offering that I know I will return to many times, should I continue to live and prosper in the years to come.

I do recommend this for you who want to stay current with the developments in the world of chamber music in the New Music mode. Bravo!
Posted by Grego Applegate Edwards at 7:38 AM