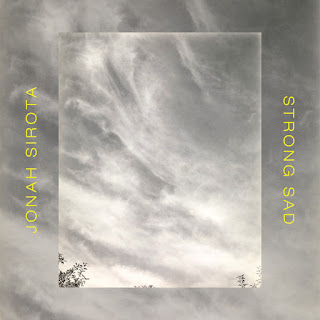 I am tired of starting off posts with, "oh, and now for something different!" Monty Python did that better than I can, yet there is truth in the saw. They rung down a stage and rung up another. And on today's Modern music scene, differences really do make a difference. And my inclination naturally is to say that about today's music, because it truly is a kind of breath of fresh air.

I allude to the album Strong Sad by Jonah Sirota (National Sawdust Tracks 2018). A friend sent me a copy and after a few spins I began to seriously get in with the sound. It is a kind of Postmodern tonal chamber music in nearly a Radical Tonality mode. Moody, lyrical, touch driven and flying level to the earth more than flying. And all that seems good the way it is done here.

Jonah Sirota is on viola throughout. He also wrote or co-wrote two of the eight compositions on here. Kurt Knecht is on organ and co-wrote one of the works, Molly Morkoski is on piano, and Nadia Sirota appears as additional violist on the interplay much of the time. Additional composition credits go to Valgeir Sigurasson, Rodney Lister, A. J. McCaffrey, Paola Prestini and Nico Muhly.

Now the musicianship is quite high in level. The sound of the various works-groupings I might say seems "natural." By that I mean it is rather unassuming, I will not say casual because it is most deliberate, but then maybe a good word for it is relaxed. There is nothing in the way of stiffness to be detected in either the works or their performance.

And in the compositions there is a kind of a journey in pomo possibilities, various shades, none of which are unoriginal, nothing patently expected as typical of things too typical. And that is where the intriguing qualitieare, the wayward looks at what have differing amounts of ambiance, cyclicities, lyrical sadness or contemplativeness, melodic spin, viola rich poeticism.

After I had listened a few times I started feeling the pull of this music in earnest. It does not call undue attention to itself. It does not flaunt itself or make presumptuous demands on our attention, though some music does all this and if it is wonderful I hardly mind. Yet this entire program does not try to wow us or create fireworks or even to shock us with some boldness. That's OK. If you buffet in the winds of Modernism enough you might find you need something of a break from the pulling about such listener participation sometimes insists upon. That is when you might put this CD on and bask in the tonal washes, the aural watercolors, pastels and memento mori's in tone.

This one certainly is a sleeper.. And for that reason maybe seems like a sort of rare thing. I cannot say there is an album out there quite like this. I do not hesitate to recommend it to you.
Posted by Grego Applegate Edwards at 9:43 AM