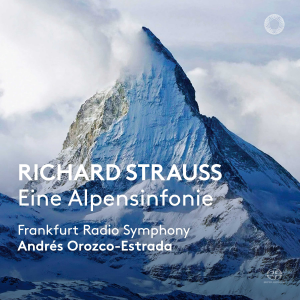 I've listened to and appreciated the music of Richard Strauss since my high school days.  There was a huge spike in his popularity when 2001, A Space Odyssey was released with the "Zarathustra" opening as a key part of the soundtrack, so it was inevitable that a young person opening up to "serious" music for the first time would find Strauss in the course of explorations. So I did. The "Zarathustra," "A Hero's Life," "Eulenspeigel" and in time the operas got my attention and appreciation. "Symphonia Domestica" was a work that I tried on a number of occasions to get into, but for some reason liked well enough but somehow never quite clicked with. The same too with Eine Alpensinfonie (1915). It wasn't that I actively disliked either of these later works. It was only that I failed somehow to grasp them as wholes. Yet I re-listened periodically to the LPs I have had since the early days.

I had the opportunity recently to hear and review a new recording of An Alpine Symphony (Pentatone PTC 5186 628) and I thought, "why not?" So for the last several weeks I have listened to the Frankfurt Symphony under Andres Orozco-Estrada have their way with the sprawling Late Romantic behemoth. To my happy surprise, this time with this version the music suddenly came into focus for me. Partly perhaps I have had some time away from Strauss as a steady diet and so too I am no longer seeking as I hear to compare it with Strauss's earlier tone poems.

And credit must surely be given to the quality of the performances and the audio liveliness here. Orozco-Estrada and the Frankfurt Radio Symphony give the music not just the heroic quality it needs to breathe freely. They give equal weight to the tender retrospection and a tempered passion. Because of all of this I hear the music now as if for the first time. It no longer seems to me a kind of return to "A Hero's Life." Surely it still seems to me in direct relation to that work, but as quite a bit more than a reflexive re-sounding. It is music that stands very well on its own, with no comparison's needed.

Perhaps like Strauss's celebrated "Last Songs" it is an aural equivalent to "older and wiser?" After all, 17 years separate the Alpine from the Hero work. Strauss by then was not quite the cutting edge "Modernist" he was thought to be among New Music devotees at the turn of the century. There were signs that Strauss and the Later Romantic programmatic ways were being supplanted by new tendencies, or we might infer that when looking at what was being created and creating attention or scandal among his contemporaries in those days. Yet this was a work he no doubt felt compelled to create, and surely not as some afterthought.

Time marches on. We no longer need to topple Strauss from the throne of leading-light advances, nor for that matter do we need to restore him to the original sunlight in which he once basked. So too then the Alpensinfonie need no longer be a part of a later horse race. In the end everybody won and nobody won as well. There is a place for the symphony in the gathering of other influential compositions of that era. If we give far more weight to later Mahler than we once did, if we view early Schoenberg and Stravinsky, if we praise Ives and others that nobody knew then, if we look at many composers in more detail and consideration that might have been the case, it does not mean we then dismiss later Strauss.  The strife is o'er, the battle done. Nobody really won. And that is all the better for us because it means that much more music we can listen to without regret. So I recommend this recording, very much so.
Posted by Grego Applegate Edwards at 8:06 AM