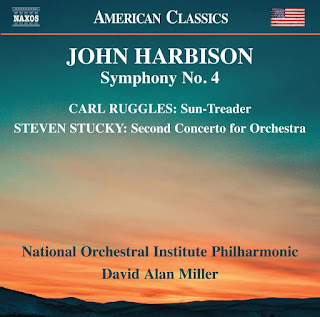 When a recording project is right on many levels, it simply clicks and if your ears can discern what is happening you are the happy beneficiary. I feel that way with today's album. It features three contrasting "American" orchestral works, American in the sense of USA or for some folks E.E.U.U.

The selection creates a zone where we hear three very compatible yet distinctive approaches to the orchestral arts, none of them less "American" than the others, by simple virtue that all three composers have soaked up the life strains of music in this space, and then gone on to ply their own will upon it all, to make their own something from the matrix.

The National Orchestral Institute Philharmonic under David Alan Miller give us a volume in a projected series of such for Naxos. I should give you the particulars now or risk forgetting what should come first. The album features John Harbison Symphony No. 4, Carl Ruggles Sun Treader and Steven Stucky Second Concerto for Orchestra (Naxos 8.559836).

Now that pairing happens to work well, at least for me. You start with an absolute masterpiece, the Cranky Yankee himself, Carl Ruggles and his beautifully explosive 1926-31 "Sun Treader." I have never heard it played better than here with Miller and the National Orchestral Institute Philharmonic in rich, deeply expressive heaven. It is a work that sounds as fresh today as it ever did. And this performance reminds us how we should ever hear his music, for he was a master, truly. Is this music cranky? Only in the best ways!

Steven Stucky (1949-2016) may not be terribly familiar to many of us. He is not someone I know musically very well. Yet this 2004 "Second Concerto for Orchestra" has very much of interest going on. It won the Pulitzer Prize so that says something. There is orchestrational and sound colorful imagination to be heard and appreciated.

In the end the "Symphony No. 4" (2004) by Harbison is the must-hear of the three. For whatever reason I've missed the earlier recording or two of this but Miller guides the outcome with a sure hand and a firm grasp on the kaleidoscopic, jazzy maelstrom of inspiration that makes up the whole of the work. I do not recall ever being disappointed in a Harbison work. He keeps an ever-inventive musical mind focused and brings to us plenty of sheer music-joy. Here is a wonderful example and it is an essential for any who follow the USA branch of Modernity.

T sum up, this is another one of the reasons why Naxos gives us so much musical worth when they hit on a combination and they do it often. For a modest price you can grab this, an essential step into exploring American orchestral Modernism in three equally exploratory and worthwhile audio journeys, played with great care and understanding, sounding just fabulous! Do not hesitate! Grab onto this one, do.