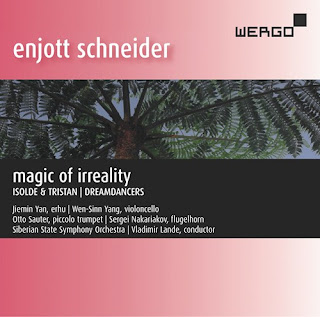 "We are surrounded by emptiness and dreams," says the composer Enjott Schneider in the liner notes to his recent CD Magic of Irreality (Wergo 5118-2). We are composed bodily of mostly empty space. The solid part of us and the universe is reality energy in motion. Well and good, though on a Monday morning I do prefer to think of the world as very solid, even if that is illusory. I have trouble with the morning coffee, getting it inside me and then dealing with the week! Nonetheless that is in a sense MY problem and nothing to do with the music at hand. And as music can remind us in the best ways, there are seemingly ethereal forces at work always in our life and it can be the best of all of our experiences.

In fact the music in the words of the composer "seek[s] out poetic contradictions," the aerated energy in the illusion of solidity if you will. Imagine Romanticism teetering on the edge of modernism as in ,Wagner's "Tristan" and Schoenberg's "Verklarte Nacht" then add the translucent liquidity of Debussy's "Images" and you may begin the see a picture of the precedents and roots of the two double concertos that comprise this album.

The Siberiun State Symphony under the recently recording rich, ubiquitous conductor Vladimir Lande confidently and artistically present the orchestral tapestries of Schneider with real sympathy and understanding, it seems to me.  The soloists for the two concerted works are admirable. For the work "Isolde & Tristan" Jiemin Yan takes the solo erhu part, Wen-Sinn Yang the cello. For "Dreamdancers" it is Otto Sauter on piccolo trumpet and Sergei Nakariakov on the flugelhorn.

"Isolde & Tristan" reverses the order of the characters to underscore Isolde's importance to the story. Solo erhu and cello sound their magic part in expressive ways. Movement  one combines motifs from the Tristan prelude especially with music of a Chinese "character," as the composer puts it.   The second movement deals with the potion in the story and juxtaposes diatonic Irish inflected melodies of Tristan's homeland with Wagnerian chromaticism. The third movement looks at the night love scene and uses motifs and excerpts from that part of the opera and for the first time the two concerted instruments join in expressive duets. And so the work continues for two more movements and you can hear that and read about it for yourself. Any devotee of this opera will find it all familiar yet reworked and imaginative.

"Dreamdancers" comes into the world of dreams with the night's emotional unrestraint and extra-real unreality. There is much of musical interest to explore here. Distinguished thematic content and a kind of pictoral melodic landscape keep the music in a later tonal mode with the two horns leading the way through the episodic thickets. The horn parts are breathtaking!

See my blog posting from January 3, 2017 for a review of an earlier concerto disk by the composer. I liked that one as well.

Schneider proceeds according to his own dictates and proclivities, and fashions a well-crafted and expressive blend that does not go out of its way to be "Ultra-Modern" yet too would not be mistaken for a work of a composer in say 1900 or so. That indeed is part of the charm, that it comes out of the past to make a singular future for itself.

In the end I appreciate this music. It is neither wildly contemporary nor is it somehow reactionary. This is the music Schneider was born to make, without a doubt, and it grows out of his own musical personality and so is organic I suppose you could say, not in the least ingratiating in a superfluous way. Delightful music, worth hearing.