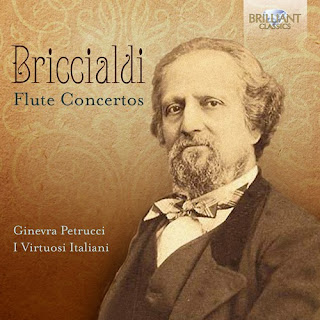 Giulio Briccialdi (1818-1881)? Who? That would have been my response a few weeks ago but no longer. That's because I said OK to a chance to find out what his music sounds like. And so duly arrived in the mail the CD at hand. I've played it enough to know what I very much think, namely that the music is delightful! So we have his Flute Concertos (Brilliant 95767), four to be precise, in a "First World Recording" featuring the limber and accomplished flautist Ginevra Petrucci with the very capable I Virtuosi Italiani.

For the music you might imagine Rossini and the Bel Canto composers along with perhaps an underpinning of Mozart-Haydn? It is firmly classical-era based, operatically melodic, filled with a buoyancy you might well not expect to hear from someone you've never heard before. This music floats like a cake of Ivory Soap, but it does not taste bitter if you try and digest it--not recommended for the soap! (That's why parents washed your mouth out with it. They NEVER would have played Briccialdi instead! Even if they knew of him...) The music is sweetly happy and perhaps only the Italian School of those days got away with such things? It is a matter of discussion, but not here!

So each of the four concertos is a little gem, and not all that little either. The flute parts are brilliant and fit together with the orchestra as a soprano might in an aria, just enough that you cannot mistake the feeling of having been here before, yet never quite like this.

Once you hear this disk a few times you are not surprised to read (in the liners) that Briccialdi started out on flute, which he initially learned from his father. He became famous in his day for his pioneering flute brilliance and his compositions were much appreciated. The flute passages have a very knowing ability to bring out a ringing sonance that Ms. Petrucci takes to heart and capitalizes on. It is a near-perfect meld between composer and flautist I hear and it is a joy indeed to listen to.

So if you want something bubbling upward out of your speakers and you love that Italianate Bel Canto spring in a concerto, and who knew to look for it, this will make you a happy camper I suspect. It is thoroughly of its time and place, but in the very best of ways. Get this if you want to be a little different!
Posted by Grego Applegate Edwards at 7:03 AM