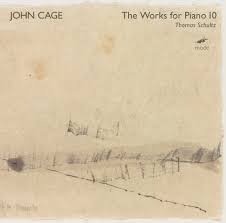 At the risk of sticking my neck out too far I will tell you that I think John Cage's piano works are among the very most significant body of Modernity of the last half of the 20th century. I do not say that casually. I have listened to most all of it intently over a now long period of my life, beginning in high school and continuing on to today. There are reasons why I feel this way of course and it has to do with Cage having a special affinity with the instrument.

Oh yes, the prepared piano works met fairly early on with a lot more acclaim than was usual for the gaggles of extreme New Music coming out in those days. The reason why people tend to be fascinated by them even today is in part the reason why his piano pieces as a whole are most all enchanting. He we now all realize was highly influenced by Satie and the sort of attention to the sounding of an atmospheric kind of tone series in Satie's works you hear most always in Cage's oeuvre if you are already alerted to look for it. And that is only part of it. Some of it is incredibly hard going for a performer. The maps of the heavens works are in my head when I consider such things.

What matters for today is that thankfully there have been more recordings of Cage's piano music than some of his other works. And today we have a particularly good one. It is but a volume in a complete series, but when you get a volume as one volume, you listen to it as a discrete entity and so here I am with that.

I speak of John Cage's The Works for Piano 10 (Mode 304). It features Thomas Schultz at the piano. I may have other volumes of this complete oeuvre tucked away somewhere but if so I do not remember where. With Cage's piano music I never turn down an opportunity to hear other versions because the differences can be of course startling. But the Mode series has crept up on me. No matter because this Volume Ten makes up for what I may have missed.

Thomas Schultz can tackle the super abstract pieces with a supreme mastery of making the seemingly random become very pianistic and sound as fortuitously  poetic as it no doubt should. And then he can bring out the lyrical side of Cage in ways as convincing as anyone. First and foremost his are very pianistic readings, so that you feel the piano is not just some menu of note and attack choices, but of course a subtle, endlessly subtle vehicle that can bring as many nuances as you might care to bring to a performance.

The choice of works for Volume 10 is also seemingly apt. At the center of it all is the "Solo for Piano," the solo piano part to his masterful "Concert for Piano and Orchestra" of 1958. It turns out that the part played alone, at least by Maestro Schultz is quite fascinating and intriguing. There are so many elements that go into the basic sound-silence framework of the music. The pointillistic jabs of varying intensity can be characteristically Modern-atonal, but they can suddenly be memorably tonal as well. Then there are very almost folksy pianissimo passages that Schultz gives an almost homespun reading of. There is so much going on in this 46 minute work that I suggest you give this a close reading on your own. And Schultz does not read it as a "bunch of notes" like perhaps some early performances seemed to do--but then with the orchestra involved it is a different animal also. So there is this, very central part of the volume.

Sandwiched at either end of the "Solo" are two remarkable early works, the brief 1938 "Two Pieces for Piano" and then the very Modern-Sateian 1946 "Two Pieces for Piano." The 1938 set is very much Cage getting into a sort of Modern extra-outer edge of tonality sequence of tones. Yet it after repeating hearings takes on life in a very Cagean way, as a kind of brilliantly sleeper sequentialism.

The 1946 "Two Pieces" is played with such attention to detail and striking contracting attacks and articulation that you hear and make very clear note of the almost blandly tonal chords and otherwise very tonal moments in the context of a modern "Modern" edged-tonal sequence.  On this recording it all starts coming together as a Zen Rock Garden, with the tonal "objects" standing in bold relief to the "raked sand" if you will. With Schultz's reading it becomes alive as perhaps never before. You hear more Satie in there (or I do anyway) than you might otherwise and it is both beautiful and revelatory.

In the end this program if you take it seriously gives you a hugely vibrant look at some of the staples of Cage's piano output in ways that make you more aware of the brilliance of them, if you listen with an open set of ears. It is rather astounding in its impact if you give it a chance. I recommend this volume most heartily!