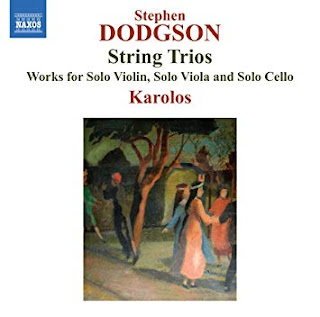 Stephen Dodgson (1924-2013)? I reviewed his 24 Inventions for Harpsichord for this blog on August 17th of 2017, just about a year ago. I liked his tip-of-the-hat to historic forms that nevertheless had a contemporary Modern outlook both original and well wrought. Today we have a new volume of his works, String Trios (Naxos 8.573856). It broadens my view of the composer and gives me an uncompromising series of chamber works for small string ensembles. I believe I am the better for it. Read on to find out if you might be as well.

And what of the composer and his life? The liners help out. He was born in London, served in the Royal Navy during WWII. He then enrolled in the Royal College of Music, subsequently studied composition with Patrick Hadley in Cambridge. Two compositional prizes and a scholarship allowed him to spend several years in Rome, and he returned to London in 1950, where he taught and composed to survive and make himself over in his own musical image. The first String Trio included here marks a high point of his first years.

The music we hear on this program consistently merits close attention. He presents a basically tonal centered yet Modern-edged pallet in the works presented. The String Trios 1 (1951) and 2 (1964) are the main focal points of the program, acting as a kind of sandwich for the three solo string works that contrast nicely enough with the trios.

The solo works have a seriousness of intent and an exploratory mode that marks them as worthy. They cover each one of the three instruments assembled together for the trios. So there is the "Sonatina in B minor for Solo Violin" (1963), the seasonally apt "Caprice after Puck" for solo viola (1978) and the "Partita for Solo Cello" (1985).

Three members of the performing group Karolos provide the fine performances we hear. There is Harriet MacKenzie on violin, Sarah-Jane Bradley on viola and Graham Walker on cello. As players of the solo works they are accomplished and idiomatically appropriate, and as a string trio they excel with a coordinated and briskly brio or a tenderly reflective undulating whole as needed.

Those who gravitate to the serious chamber intimacies of the Modern-Tonal yet expect there to be a consistently intricate edge and would like another twist to a kind of Neo-Classical outlook, seek no further. The world might not move under your feet as you hear this one, but then you will no doubt find the music very well performed and doubtless worthwhile. Four of the five works are in their premier recordings, so this is that place to hear them. And to me they are worth hearing. So.