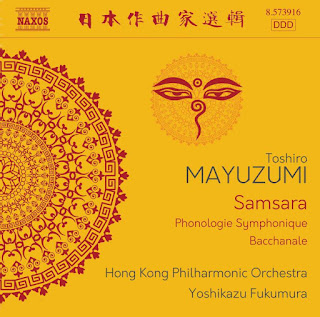 The music of Toshiro Mayuzumi (1929-1997) stands in a place of singular originality to my mind. I've been listening to his orchestral music for years and I must say I love it. There is a new one, very happily at least for me, and it features the title work Samsara  (Naxos 8.573916). The Hong Kong Philharmonic under Yoshikazu Fukumura approach the music with the dash, engagement and vibrance it so much requires, and the works themselves are pretty much typical and idiomatic, with the exception somewhat of the second work, but see below.

For an old Mayuzumi saw like me the early 1953 "Bacchanale" is very illuminating because it shows a Mayuzumi not entirely set into form but fascinating for that.

If you think of the Varese of "Ameriques" then you can then think of how Mayuzumi and he share something, though each in different ways. Then think of some of Luc Ferrari's works and you have the makings of a school which must no doubt include the Stravinsky of "Rite" and some other works of his, "Agon" for example. It is as much as sort of "Primitivism" as Picasso and his fascination with African masks. And I do not mean that negatively.

There are of course the Minimalists out there and I love some of it to tears! The prototypical Reich-Riley uses repetition kind of cosmically and-or African-Indian-Indonesian trancically? The repetitive cells are relatively short, smear-like and one if everything is right can enter a hypnotic zone and tap ones foot at the same time. Now when done well this sort of thing is extraordinary. When done less well it is less extraordinary and can even become a little bit or. a lot banal! And I do not mean either Reich or Riley.

Mayuzumi on the other had comes from a different place that Stravinsky and Varese more or less set the stage for, and Luc Ferrari also practiced, So that is the art of long-form repetition-variation. One could argue and rightly so that even Sonata Form as a whole assumes repetition and variation, well sure. Mayuzumi's long-form repetition builds more or less complicated cellular motives which he then enacts at emotionally taught moments, repeating and varying them. It is the choice-content of the motives and the way they interact with non-repetitive elements. That is the crux of the matter!

So this volume has a great selection of works well performed. If you do not know Mayuzumi here is how to know him a little. And of course if you do, we have another one that bears up under scrutiny and adds nicely to what you already might know and own. Mayuzumi is an essential Modernist and a most original one to boot. Get this.
Posted by Grego Applegate Edwards at 7:36 AM