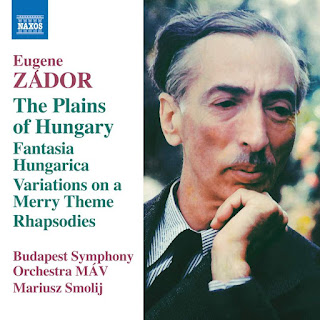 In my experience in the States there seemed to be few chances  to know the music of Eugene Zador (1894-1977) as I was growing up. I cannot recall thumbing past a Zador section or even much in the way of releases in the old record store classical bins, and that was to me a sure indication of someone's status on the music scene then, for better or worse. His later works addressed Hungarian themes and had a folk-like homespun quality at times without adopting directly any nationalist melodic material. Yet there is real inventive facility, an excellent sonaric command of the orchestra, poise and personality in the musical unfolding.

Or it least that is what I have been hearing in the latest Naxos volume of his music, the first I have had the pleasure to hear. I mean The Plains of Hungary (Naxos 8.573800). It is a program of some seven orchestral works, six in their recorded world premier. Doing the honors is the Budapest Symphony Orchestra MAV as directed by Mariusz Smolij. I can find no fault in the performances. In fact they are enthusiastic and balanced.

The back cover of the CD notes that Zador "fused Classicism with Romanticism." Yes I hear that but there seems also a kind of Hungarian Impressionism at play here as well. A tendency to tone paint, to have a dappled descriptive dimension, this is an aspect of the music that provides more than a sort of Classical-Romantic fuse.

So there is a good mix of the earlier and the later, the Nationalist and the generally descriptive. If you did not know some of Zador's titles you might not always make the Hungarian connection yet you certainly can find some local expression once you look for it. A perfect example is the 1969 "Rhapsody for Cimbalom and Orchestra." It is neither dealing with gypsy cliches nor is it in an abstract zone. And for that it is Zador in a characteristic mode.  It is a strength and I suppose there is good reason why this piece of all of them has been previously recorded commercially. But that is not to imply something negative about the rest of the music on this CD.

We get six more works, each in their recorded firsts, the 1965 "Dance Overture," the 1970 "Fantasia Hungarica" for orchestra and a subtle solo contrabass, the title work "Elegie, 'The Plains of Hungary,'" from  1960, then  finally the rather chipper 22 minute "Variations on a Merry Theme" (1964), and the finale, the 1961 "Rhapsody for Orchestra."  All of the works are in emphatic earnest, all have serious ambitions though they cover moods that range from regretful to jovial. Kodaly is not a huge contrast to Zador yet they are distinct and not easily confusable one with the other if you listen intently. This is not especially a set of works with some depth psychology of a Late Romanticist like Bruckner, say, nor are we hearing a Beethoven-like or Brahms-ish heroism, Mendelssohnian Puck, or not really except perhaps obliquely on "Variations on a Merry Theme," no brashly modern Bartok but more Bartok than not-tok. No Stravinsky Neo-Classical at least as he approached it, no Darmstadtian avantness.

And in the discovery of what Zador is not, by elimination you discover what he is. That is himself. And in order to fully arrive to a Zador landscape you must listen more than once. It is not music that especially jumps out on first hearing and mows you down. It may never exactly mow you at all. Instead it has a kind of expressive alone-ness that invites you to join with it for a time. You do so eventually or I did. And if I do not get an elation, a Maher-esque, heaven-bent elation, nor do I want to weep and laugh uproariously as I might with Berlioz, that is OK. Actually it is a good thing, very good. You do not get deja vu much, if at all. Yet the originality does not hit you over the head either. It is music very well crafted, personally idiomatic, with the kind of classical emotional control of a Haydn, but nothing like Haydn? Surely.

If you want to know the Hungarian Modern period better, Zador certainly should not be missed. This is a good place to start.
Posted by Grego Applegate Edwards at 7:51 AM