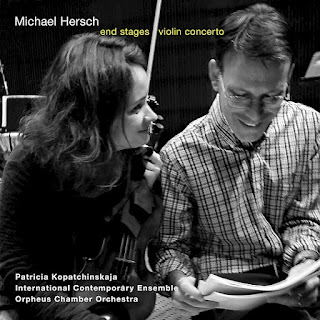 To my mind Michael Hersch has become one of the leading luminaries in High Modernism today. He convinces us that there is plenty of stylistic room at the top for the extension of the tradition into living times--and that he is charting a major foray into the zone with every new work. I am not alone in thinking that. If we needed further indication it has arrived decisively and happily in the major new disk that is upon us, a premier recording of end stages violin concerto (New Focus Recordings FCR 208).  The 2015 "Violin Concerto" spotlights Patricia Kopatchinskaja as the solo violinist with the International Contemporary Ensemble in the capable hands of Tito Munoz. "End Stages" (2018) gets the attention of the Orpheus Chamber Ensemble. Both are essential; the final result shows an enlightened pairing.

What the two works do is widen our appreciation of the orchestral/concerted Hersch. Both works relate to one another with a seriality that is pleasing. Do both works have an expressive extremity that reaches out to a potentially menacing hugeness to call attention to the human presence in the universe?  I hear that, even if perhaps the feeling is more Rorschachian than objective, it we really can relate feeling reactions absolutely to musical tones. And is there a total objectivity available to us in these matters? Not as far as I know. Not on this level.

The Concerto is meant to commemorate the life and passing of a friend. It was commissioned by the St. Paul Chamber Orchestra and violinist Kopachinskaja. Some somber lines from two Thomas Hardy poems serve as epigrams. A sculpture by Christopher Cairns, Stanchion, adds a kind of correlate to the music from the second movement onwards. Heroically bleak is perhaps the two words that most occur to me as I hear the work repeatedly. There is at the thickest points of the work a special strings against unstrings dichotomy to the music, with the solo part and the string section forming natural alliances and having the more to say while winds join in most appropriately at any rate but not much on their own so much as in tandem. Patricia takes the part with a muscular poeticism that drives forward the shape of the music and sets the pace that the orchestral groupings emulate and further admirably.

"End Stages" (2016) truly seems to continue the musical discourse set in motion by the concerto. It is a sparser, quieter meta-monstration on death and Hersch seems to lighten  the burden of grief just a little to allow the sunlight to shine through the louvers of the wooden screen just enough for us to reclaim the boundaries and borders that mark us off from the "not we."  If that seems whimsical to you, listen carefully to the music and you may feel it too, but it does not matter as much as the feelings that this music truly "means." The Orpheus Chamber Orchestra take over the musical chairs for this seven part briefer work.There is nothing lightweight or incidental about this music, but then Hersch happily seems incapable of meaninglessness.

If the music on this program is more bracing than joyful keep in mind that we do not remember, say,  the story of Oedipus because it is chipper and warm-hearted! Music like literature need not be grinning at all times from ear-to-ear to involve us in serious openings onto a supra-human terrain. That Hersch can do this with increasing strikingness is a reason to rejoice anyway. We need as a species to do more than talk of walls and witch hunts! Lest we forget what makes us special, get this new volume and listen with care. Yes, there IS the new in New Music. This is one place to find it and hold on to it.

Like the generally unsung Alan Pettersson (1911-1980) there is a certain amount of biographical pain and anguish in Hersch's music. And so perhaps is there a personally quixotically macabre strain in Alfred Hitchcock. All artists put something of themselves in their work, no? We come to recognize it and so we come to understand something of the meaning of it all as we do.

Very strongly recommended for all Modernists who want to know that the journey continues.
Posted by Grego Applegate Edwards at 9:17 AM